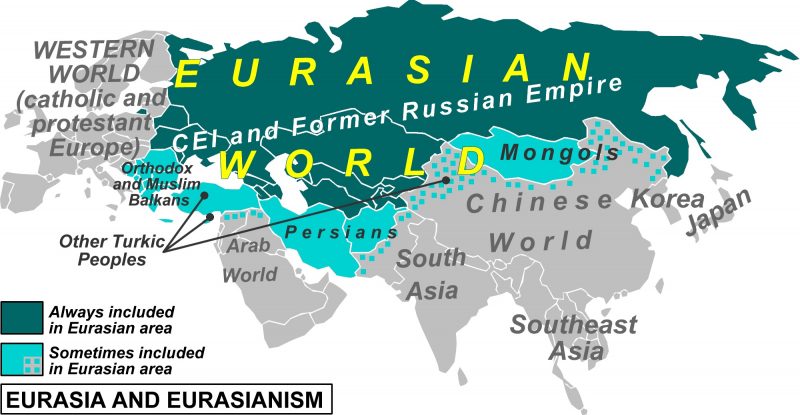 June 10, 2018 9:44 am 0
Israel Continues to Strike Hezbollah in Syria
Watch out for the Trolls, the Moles, and the Foals on Social Media
Iran sends 15,000 fighters to Syria

President Trump wants Russia to join the G7 summit. Maybe he should read about Eurasianism first. Putin is America’s enemy having demonstrated his acrimonious hostility towards the United States, and other countries. beginning in 2007 when his apparatus mounted coordinated cyber attacks to disrupt his enemies. Considering that President Trump keeps lauding Vladimir Putin, how could America become great again if Trump ignores Putin enmity towards our democracy? How could he ignore Putin’s trespasses against the DNC?

Maybe the hint resides in Trump calling on Putin to hack and recover the lost 33,000 emails Hillary Clinton deliberately erased to avoid prosecution? A smart President who wants America to be great again would never let a foreign entity come between Americans. He would never call on our enemies to help defeat domestic rivalries. This is treason, pure and simple. This is not a joke.

The notion, somehow, that Trump could work with Putin because of our common goals to defeat terror should be put to the test in how Putin deals with Iran. If Putin wants a close relationship with the United States, he would have shown some advance goodwill by exerting whatever pressure is needed to kick the terrorist Iranian Mullahs out of Syria. Instead, he accommodates the IRGC terrorists as partners.

Furthermore, Trump, who almost never reads, is totally unaware of Putin’s rise and history. Had he bothered to acquaint himself with the valuable information the CIA is willing to place at his disposal, Trump may have realized that Vladimir Putin is on an old KGB mission to defeat America for its role in collapsing the Soviet power during the Reagan era. Trump is clueless about these subtle but ever so critical historical tidbits. Putin’s smaller goal might be to avenge the siege and occupation of Constantinople by the Ottomans, but his larger goal is to defeat America, his arch-enemy. It goes even deeper than that.

Daniel Treisman of the Washington Post writes about the roots of Putin’s aggression:

The eminent scholar Walter Laqueur suggests in his book “Putinism” that the Russian leader can be understood by looking at the history of ideas. To explain current policies, one must examine the strange mix of philosophers and polemicists that Kremlin officials have been reading.

Laqueur singles out two writers in particular. Alexander Dugin, a onetime neo-Nazi and now a sociology professor, is the new prophet of the doctrine known as Eurasianism. Originally hatched among anti-Soviet emigres in the 1920s, Eurasianism posits an irresolvable conflict between Russia, the center of a “timeless steppe empire,” and the “Romano-Germanic” West.

Never mind explaining Eurasianism to Donald Trump. It will just fly over like a stealth drone. Trump ignorant attempts for rapprochement with Putin simply opens the door wider for the KGB-trained killer to build his “timeless steppe empire” on the shoulders of Trump’s Anglo-Saxon roots. Defeating America is the first step towards re-building the nomadic empires of yesteryears.

So, the question a reporter might want to ask Trump on TV, to embarrass the hell out of him, is what does he know about Eurasianism.

The question we ask, how could America become great again if Trump ignores Putin enmity towards our democracy?