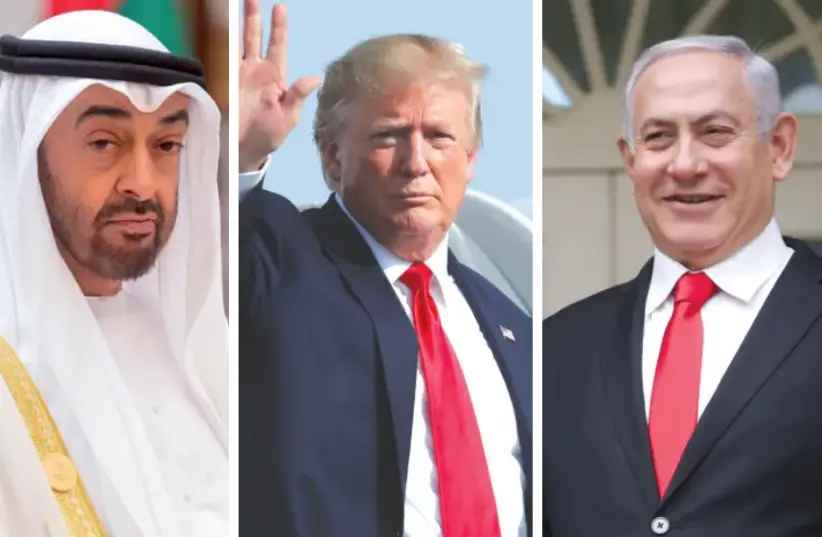 August 21, 2020 11:01 pm 0
Gabbard Took Money from Assad Now Wants The White House
Assad and Putin Are Planning for a Biden Era
Trump Last and Only Weapon Will be Twitter

For Tour de France cycling enthusiasts, they know that the first cyclist “pulls” those behind, and those following take advantage of his “draft” to save much energy to win. Team members sacrifice to “pull” their one leader to winning. One can apply the same concept to the Israeli-Arab peace process, and this is why Israeli peace with Gulf Arabs should come first by occupying the “draft” lane.

For over 70 years, Israel and the United States have been cycling in front in an attempt to “draft” the Palestinian cause to take the lead and make peace with Israel. But to no avail. Every few years or so, there has been one U.S. President or another who created enough “draft” for the Palestinians to take advantage of, and every time disappointment ensues. The closest we ever got was during President Clinton when Prime Minister Ehud Barak offered Yasser Arafat the best deal possible. That hopeful “draft” died as quickly.

In a car accident, which skin do you save first? Yours or your brother-in-law’s drunk since 1947?

THE RESULT OF OBAMA’S POLICIES

One can go through a myriad of reasons why, but let us just say that Arabs had one cause up until Barack Obama became President. He unleashed Iran unto the region and now every Arab country Iran invaded and occupied has its own cause. In a way, one can almost say that Obama involuntarily pushed the Arabs towards Israel. Something his inexperience could not have imagined.

Ever since Obama, the Syrians have their own cause (i.e. removing Assad from power), and the Iraqis have theirs of killing off Iranian influence and loosening its grip. The Lebanese as well have realized they need to remove Hezbollah from Lebanon. So did the Egyptians who succeeded in stopping the Muslim Brotherhood from railroading their country back to the 7th century. Not to mention the Yemenis battling a devastating war Iran started for them.

With Iran intent on occupying every Arab country, it was only a question of time before the Gulf Arabs tossed the Palestinian “draft” to the side and pedaled behind the U.S. and Israel seeking to save their hind from Iranian terror. Suddenly, their cause of protecting their own sovereignty has become priority. In a car accident, which skin do you save first? Yours or your brother-in-law’s drunk since 1947?

An alternative strategy might be that the Saudis, because Trump might lose the elections, choose to wait until Joe Biden is in power to gift him their peace with Israel

WHY ISRAELI PEACE WITH GULF ARABS SHOULD COME FIRST

If we had to guess, Bahrain will strike peace with Israel in September and Saudi Arabia in November. Both Arab countries aim at giving Donald Trump a push forward to win another four years because they fear Joe Biden may follow in the footsteps of Barack Obama.

An alternative strategy might be that the Saudis, because Trump might lose the elections, choose to wait until Joe Biden is in power to gift him their peace with Israel. Why? In the hope it becomes the fresh new bronco to ride rather than Obama’s old horse that failed the region. If Joe Biden can bring the Saudis and the Israelis together in 2021, it might persuade him to abandon Iran. Or any Iran Deal. Most likely, the Saudis would have that carrot dangling from Riyadh to Washington.

The Gulf Arab countries are simmering and ready to serve. They have become quickly the low-hanging fruits the United States can not ignore in favor of a Palestinian cause dithering and dying. Trump benefited from the UAE-Israeli peace, but will the Saudis, under pressure from Trump, follow suit?

Will the Saudis see their interests better served backing a losing horse, or boosting a new one? Will Biden then continue Trumps’ policies on Iran, or ignore them by following in the footsteps of Barack Obama?

Assumptions aside, any Arab-Israeli peace is good and welcomed news. It is important for the Arab countries, having been dormant throughout the Ottoman 400-year rule, to renew their energies. The Israeli western influence, tested and proven, might open their eyes to new possibilities and a brighter future.