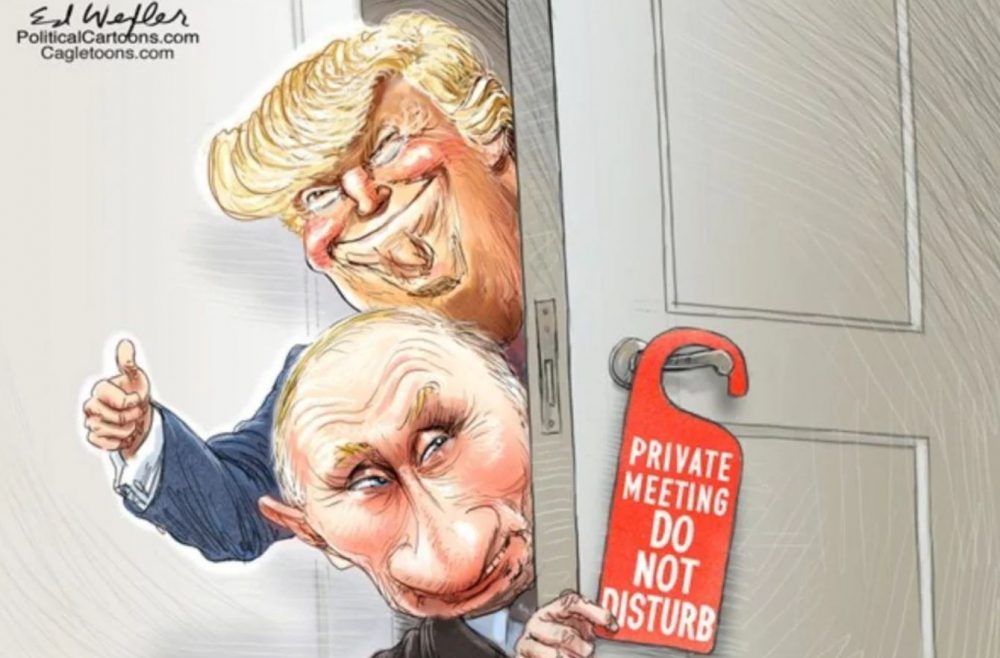 Call Falafel crazy but when he received an urgent call from President Trump to haul his ass into the Oval Office, he could not but wonder something is up. Something is bothering Trump so much, he needed Falafel as his sounding board away from all the “yes” men surrounding the President. Little did he know that ten minutes later, Falafel discovers a new Ukraine dimension that literally knock him out.

As told, Falafel hauled his ass into the comfortable couch at the Oval office. Pronto.

Trump: Falafel, I want you to listen to this conversation between me, the great Donald, and Vladimir Putin that took place back in May. Tell me what you think. Because I have a theory and a way out of the impeachment witch hunt.

Putin: Mr. President. How are you?

Trump: Why are you calling me again? As I told you before, I am on top of what we discussed in Helsinki. It just takes time.

Putin: Calm down Donny. I am calling you on another matter.

Putin: The Pentagon is giving the Ukraine funds in military aid next month. I want you to stop it.

Trump: I don’t even know how.

Putin: First, I want you to order a review of US policy towards the Ukraine. That should put the brakes on the aid until the review is over.

Trump: Who do I call for that?

Putin: Call Esper directly. Here is his private cell just in case. Ask him to start a review immediately. If he asks about Congressional oversight, tell him you’re on top of it.

Trump: Why am I doing this?

Putin: Because I want you to stop the aid to Ukraine.

Trump: But I can only delay it. Stopping it might raise eyebrows again. Remember? You invaded Ukraine and annexed its … its …. its lower tit.

Putin mutters to himself “idiot” in Russian.

Putin: Glad you asked. In return, you ask this new Zelensky fellow now President of Ukraine to investigate Hunter Biden for corruption. There are some juicy stuff there I am certain will help you get elected.

Trump (now all excited): Are you serious Vlad? What kind of information?

Putin: Let the Ukraine deliver it. If all else fails, I will see to it that you get it September 2020.

Trump: OK. OK. I will seek the review and even delay the aid. Then I will ask Zelensly for the info.

Putin: No. No. You don’t ask. You blackmail the son of a bitch. Aid for a full investigation of the Bidens. Or no aid. Send one of your trusted men to deliver the real message. Don’t spell it out on the phone. Do you understand? No Quid Pro Quo on the phone!!! Just insinuation.

Trump: But aid will help Ukraine. What’s in it for you?

Putin: Stop asking questions. Do you want to be re-elected again?

Putin: Then work your magic by following my orders. Review then halt the aid until Zelensly investigate the Bidens.

Trump: Will do. Thanks for your help Vlad. Once again, you come through for me.

Putin: Don’t forget the main issue of our Helsinki talk.

Trump: Will never forget it. I owe you so much.

Suddenly, the phone call is over.

Trump: You see Falafel what happened? It is not my fault.

Trump (hardly listening): I am going to make this conversation public. Maybe Pelosi will see the light of day.

Falafel’s head begins to spin uncontrollably. But he was still able to mutter something.

Falafel: Mr. President, what … what do you think Pelosi will … see?

Trump: That it is not my idea. It is Putin’s. That should stop her from impeaching me. She has to when she realizes I did not come up with the idea. This conversation with Vlad will exonerate me totally.

The last thing Falafel remembers was the ceiling of the Oval Office fall on his head.