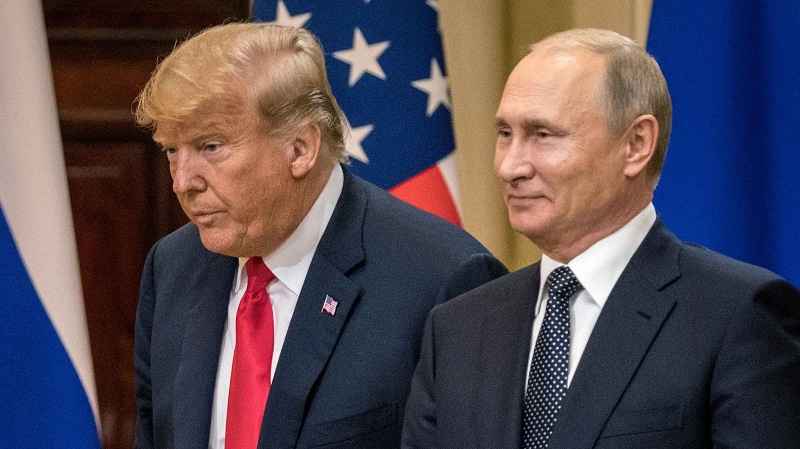 Will Putin Drop an October Surprise to Destroy Donald Trump?

September 23, 2020 6:53 pm 0
Will Joe Biden Hold Syria Iran and Russia Accountable for Their Crimes?
To Hell With 2020 Starting With COVID and Ending With Trump
Israel Continues to Attack Syrian Defenses

Dan Coats, former DNI, divulged to Bob Woodward in his book “Rage” that he truly believes Putin holds Trump by his you-know-what. If Trump polling numbers keep declining, and he is almost certain to lose the elections, will Putin drop an October surprise to destroy the personae of Donald Trump?

Vladimir Putin, if one is to accept the notion that President Donald Trump is compromised, might see more value in releasing the damning information to the CIA if he believes Trump is going to lose the elections. Whatever Putin holds on Trump is of no value AFTER the loss but could be of great value BEFORE the President is kicked out of office.

This calculation may play a role in Putin giving up on Trump in return for something of a higher value.

GO AHEAD, INVADE SOME COUNTRY

Considering the hate the U.S. Intel community harbors for Trump, Putin could trade the information or the evidence in return for, let’s say, the release of some Russian spies in U.S. custody, or the U.S. giving up on some territory somewhere. After all, our Republic is in danger, which justifies whatever action to save it including another Putin invasion of a neighboring country.

Think the US abandoning the oil of Syria to the Russians. Think all of Ukraine. Alternatively, think NATO kicking Turkey out of the alliance.

But, in return, we might finally get to know what Putin holds on Trump.

For what it’s worth, Donald Trump may have been the worst friend Russia has ever recruited. Yes, he became the President of Russia’s main nemesis, but he was so dumb that he could not keep his mouth shut. Therefore, we believe it would take one second for Vladimir Putin to throw him to the wolves. Maybe less.

Additionally, one should consider this fact in one’s equation: Trump may like Putin, but Putin could care less about Trump.

PUTIN IS IN THE DRIVER’S SEAT

As DNI, Coats had access to the most sensitive intelligence—intercepts and the best deep-cover human CIA sources in Russia. He suspected the worst but found nothing that would show Trump was indeed in Putin’s pocket. He and key staff members examined the intelligence as carefully as possible. There was no proof, period. But Coats’s doubts continued, never fully dissipating.

But how could Coats or anyone else find that “proof” that only Putin and his clique ordered and executed?

While Woodward’s paragraph may seem to exonerate Trump, it does not fully explore all the nuances of a Kompromat. The elaborate scheme and the secrets behind a compromised agent are extremely hard to assess and verify.

WILL PUTIN DROP AN OCTOBER SURPRISE

How could Dan Coats know about or have access to a video, for example, that only the Russian Intelligence filmed in Moscow, in a private hotel suite their services control in an absolute manner? No human intelligence is capable of this access or knowledge.

Especially if the video was made against a nobody figure no one believed would ever rise to become the US President with Russian help.

Think back to the Helsinki Summit of 2017. When Donald Trump and Vladimir Putin both appeared together for a press conference after a very private, one-on-one two-hours meeting. If you review the images photographers snapped that day, you will notice the stress on Trump’s face and the big grin on Putin’s.

Trump should have never stayed overnight in Moscow in 2013.
If the above is wishful thinking, reality is even worse.

If Trump is still in play polling-wise but has a low chance of winning the elections, most likely Putin would rather see him tearing into our democracy by refuting the results of a loss for Putin to bask in the glory of our constitutional crisis. This is why Putin supports Trump. He wants him to divide us and break the country apart.

Just as President Ronald Reagan pushed a defunct Soviet Union over the edge to break it apart.

Whether Putin deals a winning hand for more winnings, or whether he settles for some vengeance-laden trip of political euphoria is uncertain.

If Putin is willing to trade this hand for more, we might know shortly. October is just around the corner.

Either way, Putin controls what happens next to America. It’s the awful truth thanks to Donald Trump and his stupidity.

Will Putin Drop an October Surprise to Destroy Donald Trump?