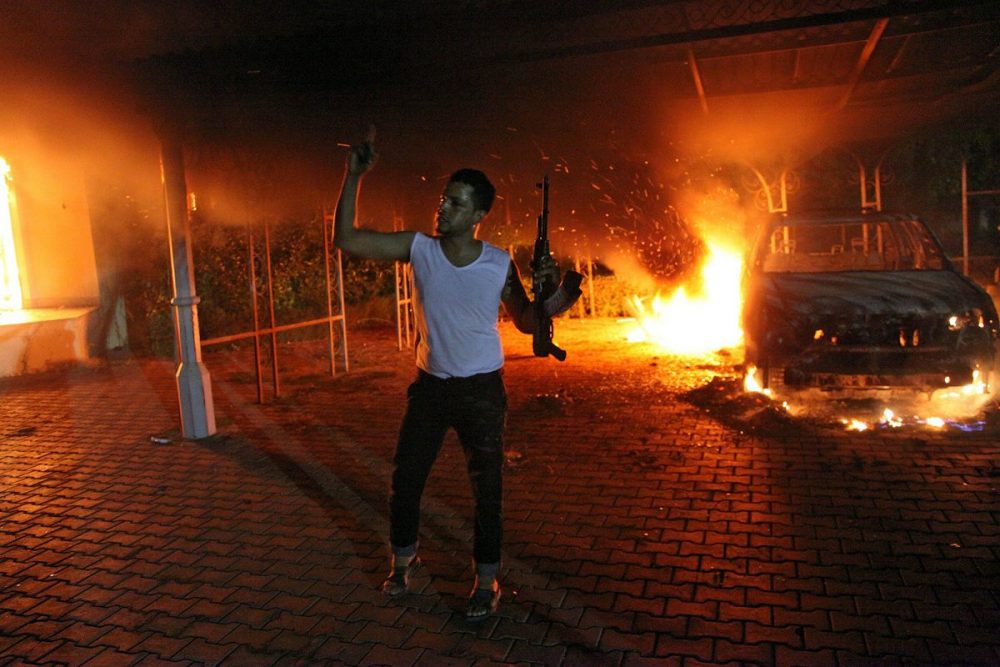 Was Obama Syria Policy Partially Responsible for the Benghazi Tragedy?

November 10, 2012 10:02 am 0
Sponsored Corruption and Neglected Reform in Syria
After Assad, It’s Hezbollah’s Turn
U.S. peace talks on Syria over before start?

On September 11, 2012, fundamentalist terrorists using the name Ansar al-Shariah (Al-Shariah Partisans) attacked the US Consulate in Benghazi, and a CIA annex located a mile away, using rocket-propelled grenades, hand grenades, AK-47, diesel canisters, and heavy machine guns and artillery mounted on trucks. Approximately 125 terrorists participated in this planned attack, which started at 9:40 pm at the Consulate followed by the second attack on the CIA annex at 4 am. One can only speculate. Was Obama Syria policy partially responsible for the Benghazi tragedy?

To this day, the conflicting reports emanating from the Obama administration have yet to explain what exactly happened; and the timeline of the attack (Apparently the CIA had a Drone hovering above filming). As important also is the spin campaign carried out by the President and his top officials to conceal the true nature of the Benghazi tragedy; to include4 the orders President Obama may have issued to stand down, which caused the death of four Americans. It also caused, so far, the resignation of AFRICOM commander General Carter Ham. It may have also, possibly, caused CIA Director Petraeus to resign. .

Those officials, days after knowing the nature of the attack, continued deceiving the public by refusing to categorically call it terrorism, and instead blamed the whole matter on an anti-Mohammad video for a spontaneous protest turned tragic.

US RECRUITING TO FIGHT ASSAD

We also learned later that Ambassador Stevens and the CIA were helping to recruit fighters to fight Assad in Syria. Some in the media called them Jihadists (Meaning anti-Americans). Something we find hard to believe given the lessons America learned in Afghanistan. Be it as it may, it is almost certain that the Benghazi operations helped Syrians fight Assad.

This is where the problem lies, we believe.

Although the symbolism attached to the date of the attack cannot be ignored, especially after the killing of Bin Laden, there is a small probability that the attack may have also been planned because the US was NOT helping the Syrian people with enough arms to stop the Assad killing machine. Only the CIA can shed light on what transpired in Benghazi; however as many of us are dissidents who were as close to the frustration experienced by the FSA and other Syrians helping fight Assad, we can assure you the issue of lack of US help and the Obama administration lack of support loomed large. It was and still remains to this day the elephant in the room.

Because of TFS intimate knowledge of the level of frustration we are privy to at every level in the Syrian opposition, TFS does not think we should discount that the attack may also have been carried out because Obama trickled the arms and the help, which to many Syrians meant the US wanted this war to last for reasons that many among the Syrians fighting find inexplicable.

The Jihadists then took it upon themselves to avenge the US policy on Syria. September 12 is as symbolic as any to carry out this attack.

ARE SYRIA AND IRAN BEHIND THE ATTACK

In addition to this theory, given the role the Benghazi CIA operations played in supporting those fighting the Assad regime, it would also not surprise us if the Jihadists attacked the US mission because Iran and Syria instigated the whole matter. This theory was never one to be considered even though we have a long history of close working relationships between the “resistance” trio and the Sunni Jihadists roaming the region. Even though WikiLeaks has presented us with certain intelligence to show similar tactics used by Assad and Iran in the past.

It behooves this administration to hide this element because it would expose the naivete of the officials behind appeasing Iran and Assad through negotiations.

As much as we regret the death of the four Americans, maybe if President Obama followed the advice of Senator John McCain when it comes to how to deal with the Syrian tragedy, Ambassador Stevens would be alive today. Maybe if Obama armed the moderate officers of the Free Syrian Army to fight Assad and Iran, this administration may not be facing Benghazi Gate. Maybe if Obama was a decisive leader, Syria would not be destroyed today and extremist elements would not be infiltrating one of the last bastions of moderate Muslims in the region.

After living for so long in Washington, smelling a scandal becomes a built-in gene in one’s DNA. TFS smells something really bad result from Obama’s appeasement and neglect of a forceful agenda when it comes to foreign policy.

Whether this policy was part of a larger campaign to pressure Iran into a weaker negotiating position or whether it was part of destroying Assad and his henchmen slowly to insure a less violent Syria in the future is hard to gauge; whether it was because of total apathy or whether it was because of a gripping fear on the part of the President Iran would terrorize the US during his term, it is not clear to many. What is clear, however, is that we may have the opportunity to question Obama on his policy in the next four years if the Benghazi matter is investigated fully.

A closed hearing on Benghazi is scheduled this coming week in Congress to include the testimonies of the Director of Intelligence James Clapper and the Director of Counterintelligence Matthew Olsen (Petraeus was supposed to testify as well). Whether this closed hearing will seal the Benghazi matter due to sensitive information the United States cannot afford to make public or whether the Republican-controlled House decides to hold public and open the Benghazi Hearings in order to let the American people decide for themselves about what happened also remains unclear.

But if there were to be any intense public hearings, we may yet get to become judges about whether the Syrian and Iranian policies of Obama led to the killing of four Americans needlessly.

Was Obama Syria Policy Partially Responsible for the Benghazi Tragedy?