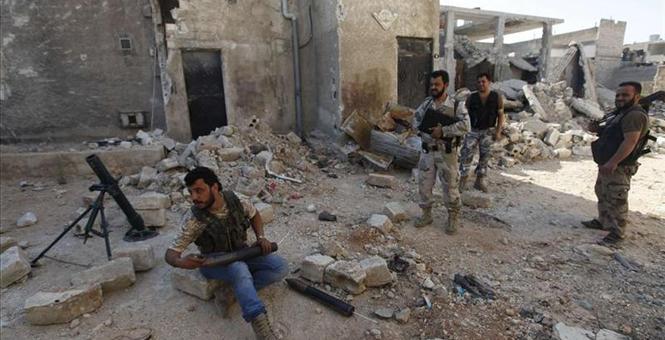 January 3, 2016 6:01 am 1
How to Destroy a Synagogue and Claim to Protect it
To be or not to bee
Turkey Shot Down a Russian Drone Around Aleppo

If Damascus is Assad’s capital, Aleppo belongs to the rebels, and Assad will not conquer rebel capital Aleppo even if backed by Russia and Iran.

A Syrian rebel group said on Sunday it was pulling out of a coalition of Islamist factions operating in the northwest of the country, in order to redeploy around Aleppo where pro-government forces have intensified assaults in recent months.

Since Russia’s intervention in the Syria conflict in September with an air campaign to support the psychopath Baschar al-Assad, pro-government forces have stepped up offensives in the west and north of the country.

ASSAD GETS SOME HELP

Failaq al-Sham, a major rebel group with thousands of fighters, said in a statement that it was withdrawing from the Army of Conquest, which includes the al Qaeda-linked Nusra Front and powerful Islamist group Ahrar al Sham, and which captured most of neighboring Idlib province in 2015.

“As enemies from inside and abroad, the regime and its Shabiha (militias), Shi’ites and Russians concentrate efforts on bringing down the Aleppo region, we are giving priority to supporting revolutionaries in the Aleppo area. We therefore announce our exit from the Army of Conquest operations room, which has finished its mission in the battle to conquer Idlib.”

The statement did not indicate any tension with other groups within the Army of Conquest.

While pro-government forces have advanced in the southern Aleppo countryside and in the western coastal province of Latakia, rebels have managed to advance in other areas including Hama province, where anti-tank missiles supplied to insurgent groups have been used effectively.

Pro-government forces have in recent days also tried to push forward against insurgents in Hama province, but failed.