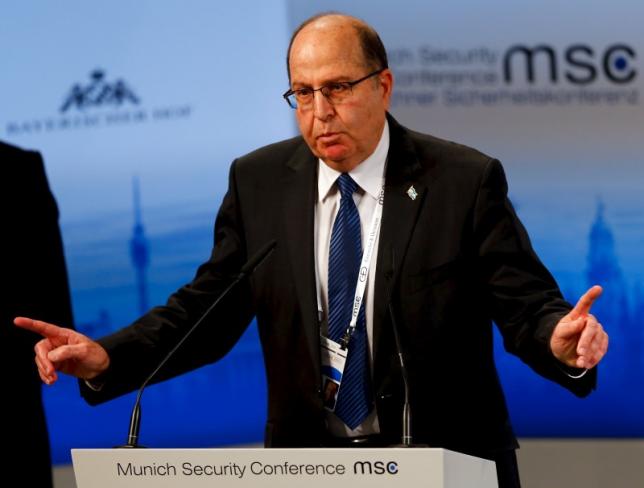 Israel voiced doubt on Sunday that an international ceasefire plan for Syria would succeed, suggesting a sectarian partition of the country was inevitable and perhaps preferable. We believe the Israeli solution for Syria has Mack truck sized loopholes.

While formally neutral on the five-year civil war racking its neighbor, Israel has some sway among the world powers that have mounted armed interventions and which on Friday agreed on a “cessation of hostilities” to begin within a week.

Addressing the conference after he met European counterparts and Jordan’s King Abdullah, Israeli Defense Minister Moshe Yaalon said he was “very pessimistic” about the truce’s prospects.

Referring to some of the warring sects, Yaalon added: “We should realize that we are going to see enclaves – ‘Alawistan’, ‘Syrian Kurdistan’, ‘Syrian Druzistan’. They might cooperate or fight each other.”

Ram Ben-Barak, director-general of Israel’s Intelligence Ministry, described partition as “the only possible solution”. He told Israel’s Army Radio, arguing that Assad’s minority Alawite sect had no way to heal its schism with the Sunni Muslim majority.

“I think that ultimately Syria should be turned into regions, under the control of whoever is there,”

Let us suppose Syria is partitioned along an Alawistan in the west, a Kurdistan in the north, and a Druzistan in the south each with its own central government. Can you see the Alawites submit to a Sunni government or the other way around?

How does that stop Iran from providing Hezbollah with more lethal weapons using the airport in Latakia to smuggle them through the contiguous lands Assad would control? Unless Assad made a secret agreement with Israel, Iran would still have much influence in Syria even when split.

How does Israel expect anything but a war between the Kurds and Turkey if such plan is put in place. A war between the two would simply keep the region off balance and unstable. Instability has a way of adding unpredictable factors to an equation. Such as the Saddam factor who helped reign-in Iran we believed his removal would make the region a better place for free thinkers. Only to discover Iran has different plans. Like we said, the Israeli solution for Syria has Mack truck sized loopholes.

How does creating a security belt in Druzistan any better than the failed security belt Israel mounted via the SLA in southern Lebanon going to be any different? The Druze of Lebanon would come under immense pressure to confront the Druze of Syria and the Druze in Syria would have to choose between their brothers in Lebanon or the Israelis. If you know the Druze religion well, you would know that the Arab Druze in Syria and Lebanon would never betray each other for an outsider. As we said, this Israeli solution for Syria has Mack truck sized loopholes.

Furthermore, what do you think the Sunnis of Syria and Iraq would do to such a plan when they discover they inherited arid locked lands with no oil? You think Saudi Arabia would not stir them to raid Alawistan, Druzistan, and Kurdistan for spoils of war? Again, there is an instability factor here that could cause unpremeditated disasters. We may think this witch’s stew is to keep Israel safe, but it may spill over in ways we cannot predict today the way we did not predict Saddam’s removal to empower Iranian terror. This Israeli solution for Syria has Mack truck sized loopholes.

Now that Turkey is eager to open new channels of communications with Israel, the Israeli leadership should send the signal to both Turkey and Saudi Arabia that it wants a secular and a liberal person to rule Syria who can protect the minorities and fight terror with the same fervor as Israel does. All Syria needs is another Rafik Hariri the Saudis could trust and Turkey could learn to trust. Then Israel should put all its weight behind finding a solution for Syria that extricates totally Iranian influence even if we have to wait for Obama’s exit another year. Russia’s economy is on the brink of collapse, and another year might be just what Syria needs to have a better plan in place than splitting it with unpredictable results.

Then and only then can a Federated Syria work because all parties see no option but to cooperate when there is but one winner. Splitting Syria today means splitting the interests of regional and international stakeholders, and this is a recipe for disaster when there is no one clear winner.

A Federal Syria might learn to co-exist, but splitting Syria with several decentralized governments is a journey and an adventure towards the unknown. Have we not had enough of those already?