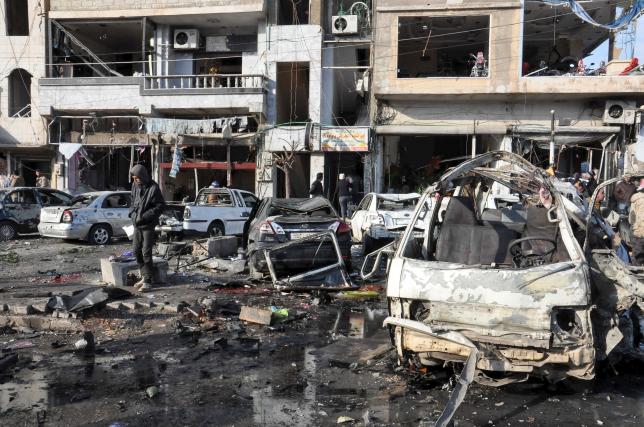 The Alawites of Syria Started a War to Finish Them

January 26, 2016 9:33 am 0
Barbarism Comes in Words Too, N’est Ce Pas Joshua Landis?
More Like a Genocide than a Civil War
If the Alawites Want the Assads, They Could Have Them

A bomb attack claimed by Islamic State in the Syrian government-controlled city of Homs killed at least 24 people on Tuesday. The Alawites of Syria started a war that will finish them off. As they terrorize Sunnis with their barrel bombs and the use of chemical weapons, Sunnis will never stop terrorizing them. It is a game of numbers and determination for both of which Sunni terrorists have an advantage.

All this destruction and death against innocent civilians just so that one psychopath Assad who tried to protect his rule by releasing Islamists from his jails to spread terror to justify himself remaining in power.

The Christians of Lebanon share power and they live peacefully, why not the Christians and the Alawites of Syria? Because both insist that Assad is the solution when he is the problem. Syria’s problem. The region’s problem.

The Alawites of Syria should expect terror to follow them for the next 100 years. Guaranteed if one looks at other historical events of maniacs committing genocides against the Sunnis.

The governor of Homs said the first of two explosions was caused by a car bomb which targeted a security checkpoint. A suicide bomber then set off an explosive belt, state media reported.

The governor told Reuters by phone:

We know we are targets for terrorists, especially now the (Syrian) army is advancing and local reconciliation agreements are being implemented.

Seventeen people are still in hospital, one of whom is in a critical condition, the governor said.

Syrian state TV earlier reported 22 people had died and more than 100 people had been injured.

Activists on the ground put the death toll at 29. They said those killed in the explosions, which took place in a mostly Alawite district, included 15 members of government forces and pro-government militiamen.

Islamic State said in a statement its attack had killed at least 30 people.

The Syrian army and allied forces have been battling Islamic State in areas to the east and southeast of Homs city. They recently took back several villages including Maheen 80 km (50 miles) southeast of the city.

The Alawites of Syria Started a War to Finish Them