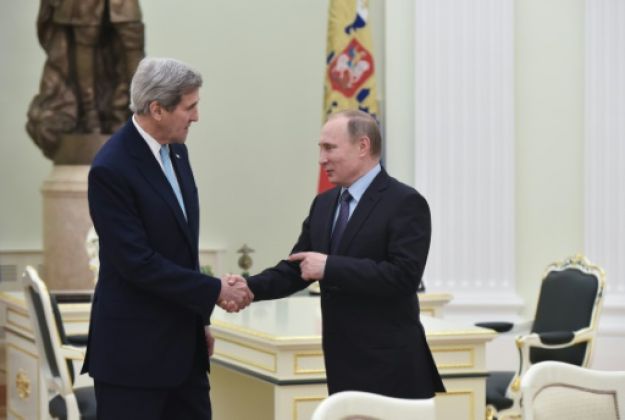 It Really Matters Little What Kerry Says or Putin Does

The Syrian opposition that met in Saudi Arabia last week selected a leader to speak for all the moderate Syrian opposition whose aim is to eradicate all traces of the Assad family in Syrian politics. His name is Riad Hijab, and before you start thinking “terrorist” or begin any spiritual convulsions over his politics, the man was Assad’s choice for prime minister of Syria and served for a short period before defecting to the other side. We dare for the psychopath Assad to call him a “Terrorist”.

“We are going into negotiations on this principle [Security Council resolutions and the Geneva 1 2012 roadmap provided for a transition without the president and a transitional governing council with full executive powers], we are not entering talks (based on) anything else. There will be no concession,”

Two facts emerge from the Saudi efforts to unite the Syrian opposition. Its leadership is moderate, and its aim, to remove Assad from power, is clear. It really matters little what Kerry says or Putin does.

Instead of supporting the Syrian opposition, John Kerry, speaking for Barack Obama, told reporters in the Russian capital after meeting Putin:

“The United States and our partners are not seeking so-called regime change.”

Again, if you follow recent history or understand the Sunni-Shiite divide, this statement just recruited, we are guessing, possibly more than 5,000 fighters to fight the Assad regime. They could join IS, al-Qaeda, Ahrar al-Sham, or any other group fighting. It also just raised $500 million more from private wealthy donors in the Gulf towards better arming the Syrian rebels fighting Assad.

For Syria’s neighbors like Turkey, Lebanon, and Jordan, what Kerry said represents disaster itself. Besides the burden of over 4 million refugees and little international funding, Kerry, without consulting these nations, just cemented their position on the other side of his equation. No neighboring country to Syria would agree to pay the price for Obama’s own ideological politics, which, incidentally, are mostly based on empowering America’s enemies.

For the GCC who have invested heavily to remove the Assad terror machine, and by extension its Iranian tentacles, this represents a clear and present danger we do not think either Obama or Kerry fully grasp. To wit is the folly of the Iran Deal every Arab country objected to its signing because it provides Iran with the tools and the time to expand and dominate the region.

Think Catholics and Lutherans 16th century Europe with the same savagery but far more modern weapons. In the minds of Sunnis, Assad represents the poster child of Shiites winning over Sunnis. No way in hell Sunnis would accept a defeat at the hands of the Shiites. Saudi Arabia, which rarely goes to war if ever, did so in Yemen to prevent this from happening. It really matters little what Kerry says or Putin does. Both will not be able to contain this sectarian war.

What about Russia now in full battle fatigues exacting losses against Assad’s opposition? We believe it is temporary. It won’t be long before the rebels find themselves better equipped to handle the Russian invasion of Syria. No foreign power has ever won against Muslims fighting on Muslim lands without the support of other Muslim nations. This fact will remain unaffected Putin’s war machine or not.

The mistakes the Obama administration is making in assisting terrorists are truly the work of community organizers who have no clue about history. They will prolong the Sunni-Shiite sectarian war at the expense of millions of Syrian refugees. Someone needs to send some history books about the Middle East as gifts for Christmas to Obama’s national security team. These folks are clueless about religious wars in general.

It Really Matters Little What Kerry Says or Putin Does