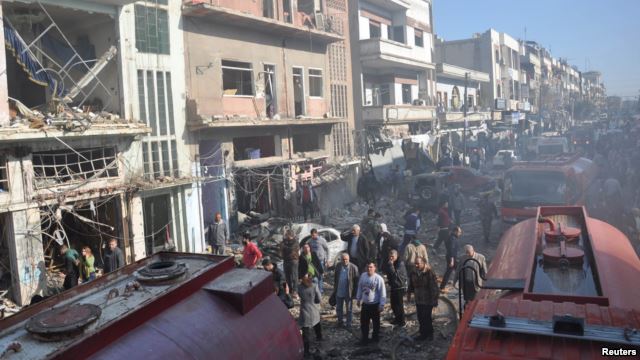 At least 32 people were killed and over 100 wounded in a triple bomb blasts Monday in the central Syrian city of Homs, state media reported. Syria’s Alawites face their worst nightmares as Islamists punish them for the Assad crimes.

“The preliminary toll in simultaneous terrorist explosions that hit the city’s Al-Zahraa neighborhood is 15 dead and 132 wounded,”

However, activists on the ground said that 32 died from the triple blasts. The death toll will most likely rise. Syria’s Alawites face their worst nightmares as the civilians pay the price for the crimes Assad committed against the Sunni majority population, which, among other things, included gassing women and children.

As long as Assad and Putin terrorize Sunni civilians, these acts of terror will continue against Syria’s Alawites.

The residents of Al-Zahraa are mostly Alawites, the minority sect of Syria’s ruling clan.

The attack came less than three weeks after the Islamic State jihadist group claimed explosions in the same neighborhood that left 16 people dead.

IS has seized large parts of Homs province, including the historic city of Palmyra.

More than 300,000 people have been killed in Syria’s war, which began in 2011 with anti-government protests but spiraled into a bloody conflict.

Homs city, once dubbed “the capital of the revolution”, came under full government control earlier this month after a ceasefire deal with rebels. Homs, in our opinion, will face such attacks for a long time to come.