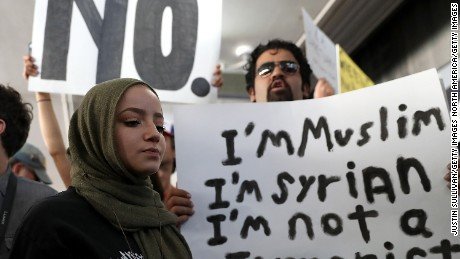 If one reflects upon Western apathy when the Assad regime systematically decimated all secular and moderate Muslims over the last seven years of a devastating Syrian war, one can make a simple and logical deduction: The terror industry serves important economic and political goals.

One one hand, American politicians scream: Where are the Muslim moderates? With the other hand, they turn a blind eye to their extinction. Moderate Muslims are a convenient football for the political establishment to maintain the terror industry alive and kicking.

Unfortunately, the American culture of self-preservation relies on boasting a dangerous enemy it must fight to survive. This solid anchor of Pax Americana also serves to administer peace according to the same cultural vision.

Terror, whether it is cyber-based or military-based being, has spawned multi-billion dollar industries across our economic spectrum. Hundreds of thousands of Americans depend on the existence and persistence of terror for their income. Be it in the form of weaponizing our military or be it in the form of counter-terror activities to protect the Homeland. Without al-Qaeda and more recently ISIS, Hamas, Hezbollah, and the IRGC, America would be less economically prosperous and less politically motivated.

Besides the fact the terror industry employs Americans, it also fills the government coffers. Specific terror taxes are levied by the government on every airline ticket sale.

Terror motivates armies and mobilizes the voting public. The terror industry is able to shape public opinion to serve the political goals of our nation. Sometimes, we invent domestic terror to indirectly shape that opinion. President Trump’s order to ban immigrants from seven Muslim countries is but one example. Even though, not one incident was ever recorded of a Muslim immigrant perpetrating any act of terror on our soil. However, the ban insinuates the opposite. If the enemy is too far, bring him home. If the public becomes resistant to fear, bring terror home. The terror industry serves important economic and political goals.

We Need al-Qaeda and ISIS

Without the terror industry, our Government cannot justify millions of cameras watching every car and every pedestrian in American cities. Without terror lurking behind our TV screens, the government would not be developing face-recognition software to monitor people. The same is true of deep data mining justified by the purpose of protecting us from terrorists. The terror industry serves important economic and political goals many of which empowers the government to control the masses if it wanted to.

The winner in this formula is a more intrusive government and the public-at-large should acts of terror materialize (Boston bomber). The losers are the moderate Muslims in the Middle East deprived of oxygen to help dispose of religious extremism and fundamentalism.

As long as the terror industry serves important economic and political goals in our domestic agenda, any moderate Muslims rising to reform Islam become enemies of America.