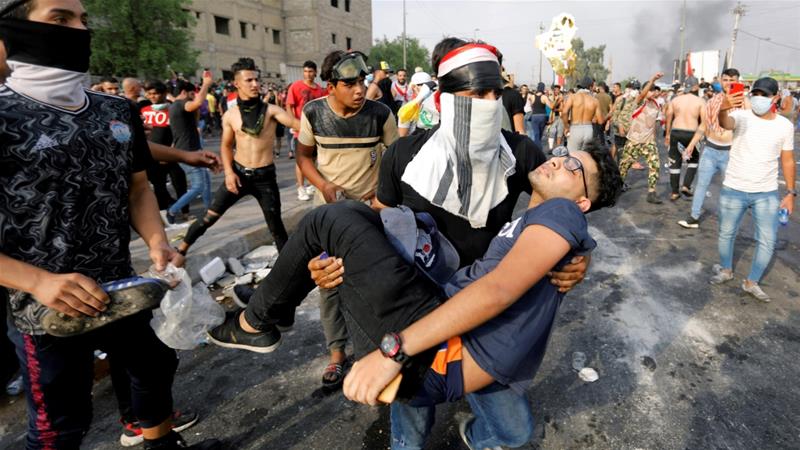 Anyway you slice Iranian occupation of four Arab countries that ex-President Obama facilitated, it is quite clear watching the events unfolding in Lebanon and Iraq that the Arab street is rejecting Iranian occupation and dominance in their own internal affairs. The Syrian civil war is on-going largely because majority of Syrians reject the Assad regime, an Iranian puppet.

Yemen is boiling to erupt at any moment once its population surfaces to breathe. They will reject both Iranian and Saudi interference that brought death and ruin to their towns and cities.

WHAT IS GOING ON?

Iranian occupation of Arab lands rely on two strategies. Total dominance through intimidation and violence when necessary, and accommodation to give Iranian dominion the chance to settle into protracted occupation and humiliation of Arabs. Neither can work without the other.

Accommodation, however, is a two-edged sword. It relies on finding a formula to keep sectarian leaders of clans and tribes pockets ringing like cash registers. At the expense of the general public. The Lebanese and the Iraqis are revolting for the same reasons. Corrupt, sectarian-based political elites, both Iranian-supported and installed, totally disregarding their responsibilities to serve the public. In both countries, the people are experiencing persistent high unemployment and relentless lack of basic services such as running electricity, clean water, or reliable garbage collection.

In brief, the Iranian dominance relies on a sectarian top-centric policy to keep the gears of its foreign-based occupation oiled and humming. Religion represents its framework. The rest is simply irrelevant.

In both Iraq and Lebanon, now rising in unison against Hezbollah and the Iran-backed militias in Iraq, the youth revolting is demanding a departure from the Iranian-planted sectarianism the Mullahs believe is necessary to dominate and enslave the Arabs. Unknown to the aging Mullahs in Iran, the Lebanese and the Iraqi youths live in the Internet age where the social media framework is their religion.

No need to explain this to the octagenrian and religiously fervent Ayatollah Khamenei. It will just fall on deaf ears. Just like explaining to Trump it was wrong to ask the Ukrainians to investigate Joe Biden.

The Iranian response to the Arab street revolting against its dominance will be violence. It already started in Iraq with hundreds of protesters being murdered and thousands wounded. In Lebanon, it is a bit more complicated because the Christian Maronite community and the Sunnis of Northern Lebanon operate their own well-armed militias. Should Hezbollah open fire on demonstrators, it will find itself take cover from returning fire.

And it would be a grave mistake for Hezbollah to use its arsenal of missiles against the Lebanese. Not only will its motto of defending against Israel go to total waste, but if Israel interferes to defeat Hezbollah and save the Lebanese people, Lebanon would fall from the Iranian orbit of influence for good. Its neutralization would be a total victory for Israel whether Lebanon strikes a peace agreement with Israel or not.

In fact, this is preventing Hezbollah from following the Iranian violent script in Lebanon. In the short-term, it is saving Lebanon from falling back into a civil war again.

We believe Iraq is heading towards a civil war in which its youth fights for their basic human rights to defeat sectarianism in politics, and kick the Iranians out of their country. It is also possible they may dictate the same for American influence.

In Lebanon, Hezbollah is cornered if the demonstrators persist with their demands for justice, accountability, and transparency. So far, we do not see any answers to Hezbollah’s dilemma. Except maybe for violence that may finally defeat the terror organization and eradicate it for good.