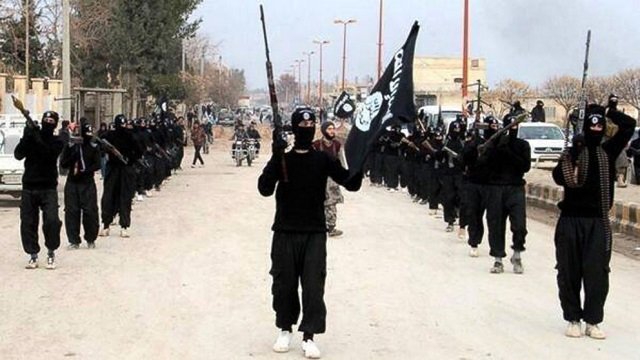 ISIS began rearing its ugly head right after the Assad regime threatened the West because it believed the West to be behind the Syrian Uprising of March 2011. That the Syrians have had enough of Assad and his violence and tyranny never even crossed Baschar al-Assad’s mind.

ISIS started when Assad released all the hardcore violent Islamists he was keeping in his jails just for that moment. Interviews after interviews of captured Islamists revealed that information. It was a similar tactic to the one he deployed in Iraq when he empowered and armed al-Qaeda to attack and kill thousands of U.S. troops.

The U.S State Department exposed Assad in an official briefing in August of 2014.

Releasing the violent Islamists was not enough for Assad. He also embarked on empowering ISIS by letting the terror organization occupy oil fields and then buying the oil back from them. As planned, ISIS soon became a grand threat Assad could turn to the West then and ask: “Is this who you want to replace me?”

The Assad plan worked. Everyone’s paying attention to ISIS, and “Assad must go” has been replaced by “Strike ISIS”.

ISIS is not about to disappear anytime soon because ISIS serves Iranian and Turkish interests as well as that of few other countries.

ISIS serves Iranian interests because if the West is ever to defeat ISIS, the chorus line for replacing Assad would begin to rise. If there is no threat of Islamism, then the Assad regime would face a clear and present danger from the West tired and fed-up with his schemes of terror.

For Iran, ISIS is a cheap insurance to protect Assad and Hezbollah only if it remained potent and on the radar screen. Anyone who believes Iran is about to use its militias in Iraq to defeat ISIS has no clue about how Iran operates in the region.

In similar fashion, ISIS of late began to serve Turkish interests when it comes to both the Assad regime and the Kurds’ aspirations in Syria that Erdogan and the Muslim Brotherhood oppose.

With ISIS retaining its terror cache and brand, Erdogan can argue that the alternative to Assad is the Muslim Brotherhood.

Furthermore, because ISIS is battling the Kurds in Syria, a capable ISIS does Erdogan’s bidding in striking down any Kurdish inclination for an independent country. Out of some 20-25 million Kurds spread between Iran, Iraq, Syria, and Turkey, the largest concentration of Kurds inhabit Eastern Turkey.

An independent Kurdistan in Syria will impact Turkish sovereignty.

ISIS serves Iranian and Turkish interests today, as well as the Assad regime, Russia, Hezbollah, and an Iraqi central government unable to control its own Kurdistan region.

Anyone hoping for ISIS to be eradicated soon should consider another hobby.

The only countries who view ISIS as an incalculable danger to the region are the moderate countries who oppose violence like Saudi Arabia, UAE, and Israel.