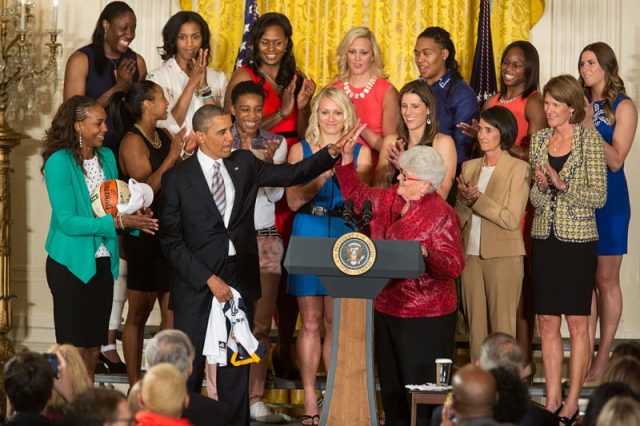 Obama Memoirs Title Should be “Life is a Party”

While Ben Rhodes, the deputy national security adviser, was talking about Syria and Assad’s use of WMD to reporters (Official statement), the President was hosting the women basketball team that won the WNBA finals in the East Room of the White House. Obama memoirs title should be “Life is a Party”.

One country using chemicals on its own people is not worthy of Barack Obama’s attention or diligence.

The last thing Mr. Obama needs is a tough question about what exactly his orders to DoD were in terms of assisting the rebels. To avoid it, Mr. Obama did what he was always born to do, which is closer to organizing than leading.

Maybe the NBA or the WNBA owners can offer the President either one of their Commissioner jobs in 2016 if he promises not to spread their wealth.

We truly believe that if Obama does not act decisively on Syria this time around by targeting Assad and Hezbollah for a humiliating and final defeat, we owe it to ourselves as Americans to begin a national dialogue on what is his real target: The Syrian people or Israel?

Either way, the President before us is acting more like a community organizer of a small town than the leader of the free world.

When you watch the video of Mr. Obama surrounded by the WNBA players and consider the problems facing the US in the Middle East because Assad, Iran, Hezbollah, and Islamic extremism continue on their journey of shaping the region, you cannot help but shake your head in dismay. Hezbollah is winning in Syria and very few people know what the real intentions of Mr. Obama are. Scary times!

We elected a President who thinks the game of Basketball is more important than US foreign policy and I think history will be a far more terse judge of his character. Because of Obama’s inexperience, he is clueless about the effect this will have on his image after he leaves the Office.

Obama Memoirs Title Should be “Life is a Party”