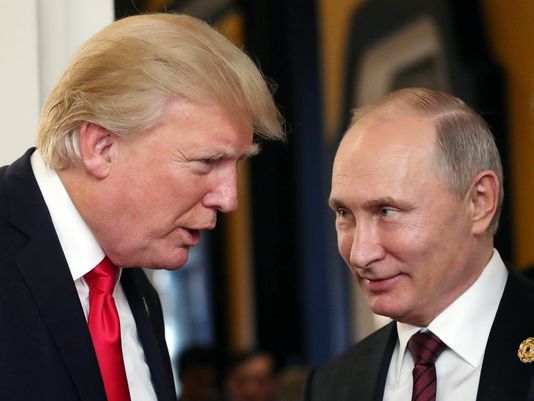 February 18, 2018 5:17 am 0
Trump Playing the Kremlin Card in Dividing America
Barack Trump and Donald Obama
Will Trump let Assad get away with using chemical weapons in Syria?

The Mueller investigation, and ultimate indictment of the Internet Research Agency meddling in our elections in 2016, has established, incontrovertibly, Russia’s sowing of domestic discord using our own freedom of speech against us. Yet, while Putin harms America Trump remains silent about the man he has praised more than any other foreign official.

To all you Trumpists out there, what does that say about Donald Trump? Trust in our President translates into personal trust of his beliefs to include people he thinks highly of.

Why does not President Trump publicly denounce Vladimir Putin for sowing discord? It is a very simple question that, without a solid answer, will always shed doubt about Trump’s business dealings with the Russians and any Damocles Sword Putin may hold over his neck.

Our Ambassador to the United Nations Nikki Haley, when it comes to Russia, is not mincing her words. At a Republican retreat, she said that “Russia is not our friend“, which is diplo-speak for a military General saying “Russia is our enemy”.  Ambassador Haley sees first-hand Russian belligerence, Russian flaunting of international laws, and utter American hopelessness in reasoning with Putin’s lackeys.

Our own Secretary of State Rex Tillerson has publicly called Russia for its preparedness to meddle, again, in our upcoming midterm elections. In an interview with Fox News, Tillerson said:

“It’s important we just continue to say to Russia, ‘Look, you think we don’t see what you’re doing. We do see it, and you need to stop. If you don’t, you’re going to just continue to invite consequences for yourself.’ “

Secretary of Defense General Mattis joined the other cabinet members in stating the obvious. He told the House Armed Services Committee:

“At this time … I do not see any indication that [Russian President Vladimir Putin] would want a positive relationship with us,”

So why does not our president condemn, or at least, call Putin for his actions against this country publicly the way our intelligence and diplomatic services have?

Russia, under the KGB-trained Vladimir Putin, is our enemy. America and Russia could work together if Putin is voted out of office to be replaced by a visionary who will enable full cooperation between the two countries.

But as long as Putin is in power, and Trump refuses to recognize his danger, it is up to the American people to realize how wrong our president is when it comes to ignoring Putin’s menace. We cannot ignore Donald Trump weakness on this issue because it would be a tacit approval of what Putin is attempting to do to our democracy.