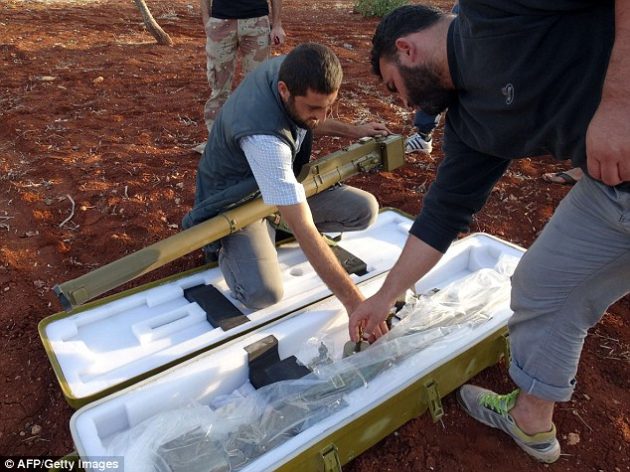 October 25, 2012 10:52 am 0
Orthodox Church Nonsensical Justification for Supporting the Criminal Assad
How Sunnis Massacred and Ethnically Cleansed the Alawis
“Al Assad! Or we set the country on fire!”

Syria’s brave fighters have had access recently to SA-7 anti-Aircraft missiles, which have been used to shoot down two helicopters and one MIG jet (From an arsenal of 80 helicopter gunships and about 750 combat warplanes deployed). In the aftermath of that discovery, Russian Chief of Staff Gen. Nikolai Makarov accused the Obama administration of supplying the Free Syrian Army with surface-to-air shoulder-controlled missiles, including U.S.-made Stingers. Our response demonstrated Obama weakness on full display.

On the same day, we heard the response from the US State Department through its spokeswoman Victoria Nuland who said:

We [US] are providing no lethal assistance to the Syrians. We have provided no Stingers of any kind to Syria, nor will we. And if there is evidence of that, we’d like to see it.

Not only the State Department defensive posture, at a time when Russia is supplying Syria with at least $1 billion in weapons annually, is unwarranted, but it also shows how weak this administration is to respond to Putin’s accusations by defending a position it neither supports nor it is actively participant in. The US is not supplying any weapons to Syrians able to defend themselves with properly and the White House is rather content with this policy.

Further, Noland did not even mention how Russian arms to Syria are killing people by the thousands. She directed no accusations against Russia the way Russia accused the US. She was comfortable to lend lip service to our tragedy by regurgitating the same statements of yesteryear.

The ongoing barbarity that the Assad regime is raining down on its people, the extreme violence that we’re seeing in the suburbs of Damascus today, particularly in East Ghota, in Harasta, in Arbeen. They’ve seen some of the worst violence in those areas since the start of this revolution – aerial bombing from planes, helicopters, as well as shelling.

Thank you Mr. Obama. Because of these beautiful words, we can win this war against one of the greatest evils ever to have existed. Meanwhile, we hope your friendship with Putin yields something that benefits America, at least once ever so often.

Constantly yielding to our foes and enemies defeats the purpose of the position of a Commander-in-Chief, does it not?