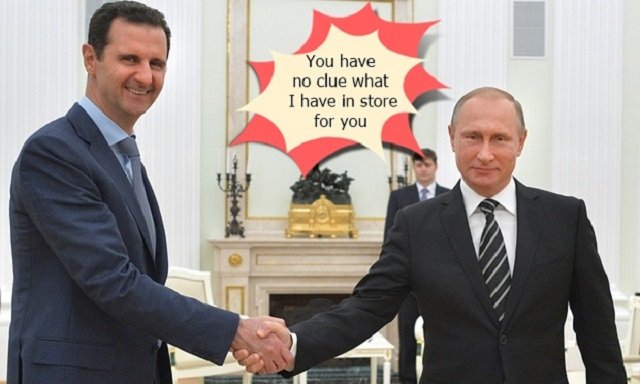 January 12, 2016 11:22 am 4
Surviving Assad Missiles
Now That Rebels Are Winning
Crossing the Bridge Between Profits and Blood

Russia is running out of reserves due to two policies. Its support of the Assad regime that sparked Saudi imposed low oil prices, and its war in Syria that is costing the almost bankrupt Russian economy billions it does not have. Add to this mix Putin’s own military expansion, and you have a desperate Putin looking to plug the hole on the deficits he is running through high stakes diabolical extortion against Assad.

So, when Putin makes an announcement that it is too early to provide the psychopath Baschar al-Assad asylum in Russia, one cannot but wonder why the conversation is heading in that direction. Why talk about asylum for Assad when Russia is slowly advancing Assad’s cause in Syria?

Putin knows the psychopath Assad is sitting on tens of billions of dollars his family pilfered from Syria in over 45 years of rule, with a big portion of the funds that Assad extorted from the Gulf countries by threatening them with violence inside their borders.

At TFS, we believe Putin has already tapped into the funds Iran is about to receive from the incompetent Barack Obama for saving Assad’s neck, and by extension Hezbollah, for the greedy Mullahs in Tehran. Now he needs to tap into those billions Assad controls and this is why this out-of-the-blue reference to Assad’s asylum, or not, is made public.

Vladimir Putin is letting Assad know his security is in his hands.

In an interview with the German daily Bild published on Tuesday, Putin said that Moscow refuses to speculate on a possible Moscow’s role in helping to remove Assad. In the interview, he indicated that it would not be too difficult for Moscow to do so.

“We granted asylum to Snowden,” he said referring to the American whistleblower Edward Snowden. “That was more difficult than (it would be) to shelter Assad.”

While Asma al-Assad is guardian to the $62 billion the Assad family pilfered over the years, which are deposited in European banks (They all benefit from these Assad funds in their banks, this is why their policies have been tilting in his favor), Putin has plans to transfer that wealth, or a big portion of it, to Russia in support of his failing economy and as the price to pay for saving Assad or, in case Putin fails, provide him with an asylum in Russia.

We believe this interview sets in motion Putin’s next step as he welcomes a particularly difficult and financially strapped regime 2016 year.

Assad, once again, finds himself caught in the net he used to spring against others with his own high stakes diabolical extortion schemes against rich Gulf countries. Either he delivers his wealth to Putin or he may find himself hanging from the next tree in Ghouta.

Putin, utterly and completely, controls Assad’s fate and the billions he embezzled.

Will Saudi Arabia Strike Assad Army Like Putin is Striking Syrian Rebels?
Assad Has Yet to Pay for Assassinating Rafik Hariri
The bastards are stoning our women
Putin Terror 436