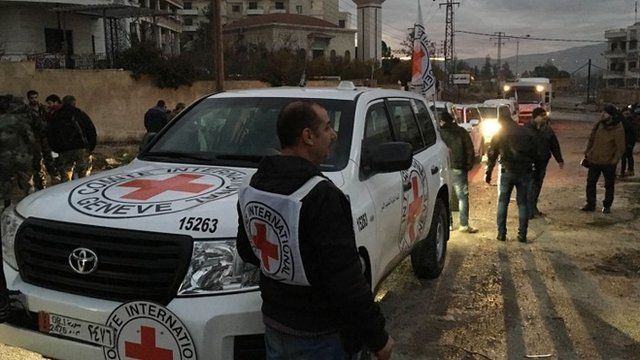 January 12, 2016 2:20 pm 0
Israel wanted Assad gone since start of Syria civil war
Saving Assad will come back to haunt us one day
Among Assad Supporters, the Most Coded Word is “Assad”

Man, are the Israelis right in killing as many Hezbollah terrorists as they possibly can. Because when those bastards are not terrorizing the peaceful Jews in Israel, or blowing up Christian political leaders in Lebanon, they are starving women and children in Syria. After aid reaches starving Madaya, heartbreaking scenes witnessed courtesy of the terror of Hezbollah and the Assad regime.

The aid workers who reached a besieged Syrian town spoke of “heartbreaking” conditions being endured by emaciated and starving residents, with hundreds in need of specialised medical help.

An aid convoy on Monday brought the first food and medical relief for months to the western town of Madaya, where 40,000 people are trapped by encircling Assad forces and Hezbollah terrorists that Doctors Without Borders said some residents have starved to death.

Pawel Krzysiek of the International Committee of the Red Cross, in discussing the heartbreaking scenes witnessed, said:

“It’s really heartbreaking to see the situation of the people. A while ago I was just approached by a little girl and her first question was did you bring food … we are really hungry.”

The World Health Organization said it had asked the Syrian government to allow it to send mobile clinics and medical teams to Madaya to assess the extent of malnutrition and evacuate the worst cases. Our bet the sadistic Assad will refuse.

A local doctor said 300 to 400 people needed special medical care, according to Elizabeth Hoff, the WHO representative in Damascus who went into Madaya with the convoy.

Hoff told Reuters by telephone from Damascus, where she is based:

“I am really alarmed. People gathered in the market place. You could see many were malnourished, starving. They were skinny, tired, severely distressed. There was no smile on anybody’s face. It is not what you see when you arrive with a convoy. The children I talked to said they had no strength to play.”

Western diplomats have condemned the use of food as a weapon of war, with the U.S. ambassador to the United Nations, Samantha Power, accusing the government of Syria’s psychopath Baschar al-Assad of “grotesque starve-or-surrender tactics”. But then, if her president could air drop guns to the Kurds, why does he not also air drop food for Madaya? Afraid Putin would remove his shirt again, is he?

Legal experts said that could be construed as either a war crime or a crime against humanity, or both.

An independent U.N. commission of inquiry on Syria has long denounced use of starvation by both sides as a weapon of war, and has a list of suspected war criminals and units from all sides which is kept in a U.N. safe in Geneva.

However, there appears little immediate prospect of such a case being brought before the international war crimes tribunal in The Hague, since Syria is not a member and any referral to the court by the U.N. Security Council would have to overcome Russian reluctance.

At TFS, we believe talk of war crimes when there is no will or legal means to bring Assad to answer for these crimes is as sadistic as it is to starve Syrians.