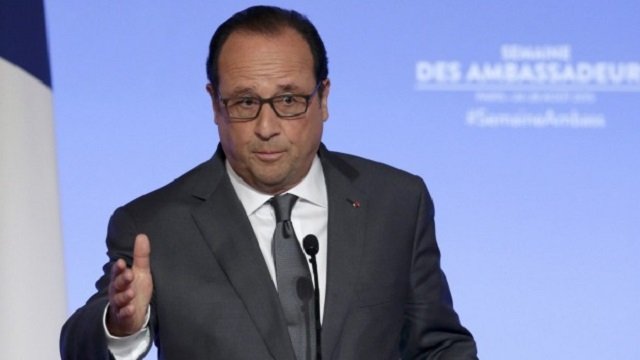 August 25, 2015 5:27 pm 0
Why Bashar Assad Won’t Fight ISIS
The Brave Words of King Abdullah of Jordan
Obama Will Not Lift a Finger if Assad Gasses Syrians

TFS Note: Unlike Barack Obama, a socialist with no strategy, no vision, or heart, Francois Hollande, President of France, also a socialist, has a sound strategy to resolve the Syrian tragedy. Neutralize Assad, France says. With the exception of involving Iran, which has been an accomplice in Assad murders in Syria, this is the best 3-point plan yet.

French President Francois Hollande said Tuesday that the “neutralization” of Syria’s Baschar Assad was a precondition to resolving the crisis in the war-torn country.

Hollande told a gathering of French diplomats in Paris to neutralize Assad:

“We must reduce the terrorist influence without maintaining Assad. The two are bound up together. We must create a political transition in Syria, it’s a necessity.”

He laid out three conditions for resolving the crisis — the first of which was to neutralize Assad. Hollande has probably the best intelligence on Syria because of France’s history that most likely said without Assad, ISIS would be defeated. France is suffering the most from the rise of ISIS.

The second was to offer “solid guarantees to all the moderate opposition forces, notably the Sunnis and Kurds, and to preserve state structures and the unity of Syria.”

The final condition, which he said would be “decisive”, was to bring together regional actors with a stake in the conflict.

“I’m thinking of the Gulf countries, I’m thinking also of Iran. I’m thinking of Turkey which must get involved in the fight against Daesh (an alternative name for the Islamic State group) and resume the dialogue with the Kurds,” Hollande said.

Syria’s foreign ministry reacted angrily to Hollande’s speech, saying it “constituted a flagrant intrusion in internal affairs and shows that France contributes to the spilling of Syrian blood”.

Hollande said France would continue to support “moderate” members of the Syrian opposition and coalition airstrikes against IS in neighboring Iraq.

“Terrorism threatens all the actors in the region… and all world powers,” he said. “Resolving the Syrian crisis demands the participation of all, and France is ready to play its part.”