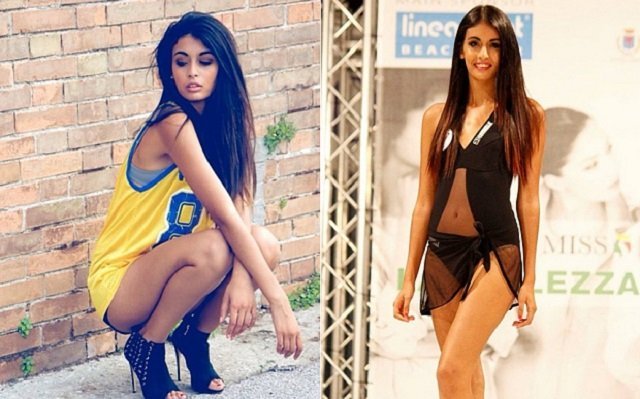 TFS Note: Bravo Ahlam for standing-up to extreme fanatics as a possible Muslim Miss Italy. Wear your bikini and enjoy life. We hope you win to free Muslim women from a choking Islam.

Ahlam El Brinis, 20, defies critics who say she is insulting Islam by taking part in the pageant

A model of Moroccan origin who hopes to become the first Muslim Miss Italy has vowed to defy critics who accuse her of insulting Islam by taking part in the beauty pageant.

Ahlam El Brinis, 20, who was born in the northern Veneto region to Moroccan parents, has received threats and insults on social media for her decision to participate in the contest next month.

She has been criticised for posing in bikinis, lacy underwear and revealing clothes, with some Muslims accusing her of bringing Islam into disrepute.

But she has labelled her critics “ridiculous people with too much time on their hands” and said she has drawn strength from the support of her grandmother back in Morocco, who told her “religion is in the heart, not in the choice of clothes you wear”.

“There have been insults but there have been far more messages of encouragement, both from friends and people I have never met,” the model told La Repubblica newspaper. “Religion should have nothing to do with a beauty contest.”

Miss El Brinis, who first dreamed of becoming a beauty queen when she watched the Miss Italy contest as a six-year-old, will take part in the final qualifying round of the pageant next week at Jesolo, a resort town near Venice.

She is a non-practising Muslim who says she respects Islam but does not want to be defined by it. She feels entirely Italian, having been born and raised in the northern city of Padua.

“My parents came to the Veneto region more than 20 years ago and I was born in Padua hospital. I went to a nursery school run by nuns, where my mum worked as a cook. My family is Muslim but they have always been guided by Western values.”

She lives with her boyfriend, Cristian, and speaks Italian at home, having learnt no Arabic as a child.

“I love to cook Italian food. I wouldn’t know where to start if someone asked me to cook a Moroccan dish,” she said.

She has recently lost some weight as a result, she said, of worrying about the contest, and is now trying to put on a few pounds by eating plenty of “spaghetti and grilled meat”.

She is an admirer of Sofia Loren, the screen siren of the 1950s and 1960s, as well as Denny Mendez, a model of Dominican origin who became the first non-white Miss Italy in 1996.

Her crowning sparked an intense debate in Italy about immigration, identity and racial intolerance, with some critics furious that a “black” contestant should win the competition.

From being a homogeneously white nation just a couple of decades ago, Italy has become much more multicultural, but still struggles to integrate and accept its growing population of immigrants from Africa, Asia and eastern Europe.