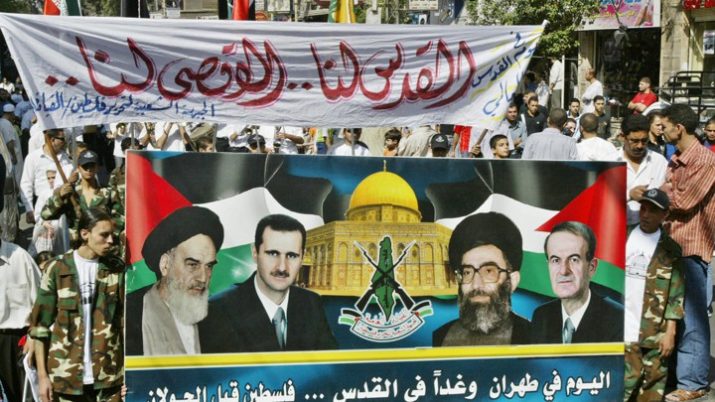 Iran is a Religion and not a Country

June 25, 2019 6:16 am 0
Trump Iran Policy? Get Serious About the Threat
In Syrian Book Fair Iran Terror Books Win Big
Memo to Suleimani: Syria is Not Iraq

Politicians across the globe tend to view Iran as a sovereign nation whose leadership is represented by men of religion. And like every sovereign nation, borders define its geography. The truth is far from this naive point of view. In fact, Iran is a religion and not a country.

After all, what is a Farsi country doing in Arab Iraq, Syria, Yemen, and Lebanon if not to spread its religiosity through steel and fire? The leadership in Iran does not recognize its own borders as it invades and conquers other people to convert them or kill them if unwilling to convert.

When Israel attacks Iranian military assets in Syria, we tend to fall back unto the aberrant analysis that Iran is a country. We stop realizing that the Iranian military machine serves to spread religion. Only with careful analysis of Iranian full activities in Syria, does one realize there is more to Iran than just a country with borders.

In Syria, Iran is forcing religious conversions in a massive campaign using intimidation and fear. Houses of worship are springing across the country in unbelievable numbers. In areas where the Syrian people have abandoned their towns to escape the Iranian terror, Iran is planting Iraqi citizens by dolling out incentives to reshape the religious landscape on Arab lands.

Furthermore, Iran is behind every policy of using Sunni proxies to fight other Sunnis. The undesirables are being systematically eliminated to prune out the Sunni tree. Assad, backed by Iran, has deployed all the Free Syrian Army combatants who chose to return into the fold to fight their brothers and cousin in Idlib and elsewhere. In return for amnesty from Assad dungeons of torture. If they do not die in battle, Iran will force them to convert.

Iran is a religion and not a country. Religion has no borders, nor does Iran.

Iran is exacting a heavy price upon Muslims as well as Jews in its pursuit of a homogeneous landscape beyond its borders. This is why the U.S. sanctions, war rhetoric, and pressure is mounting on its leadership to quit its destabilizing activities using violence as a necessity. This is why every Arab, be it those airheads raking oil fields, or the commoner on the street, should support U.S. sanctions. When one religion attempts to erase the identities of everyone around it, every person standing in Iran’s path must revolt.

ISRAEL IS DOING ITS PART

Israel is doing its part through political goodwill with the Trump administration. We should be all thankful for that goodwill whose only goal is to free us from the Mullahs’ grip.  One of the main conditions the U.S. is imposing on Iran is to pack its ugly presence and return home. Not only do Israelis benefit, but also Arabs who have become slaves to Iran the religion.

President Obama let loose a barbaric animal when he agreed to the Iran Deal. Many still believe its sole purpose was to block Iran from building a nuclear arsenal. Reality, though, is just the opposite. Obama intended, with the Iran Deal, to unleash the terror of the Mullahs in the hope, one day, they will destroy Israel. On its path are also Arab women and children Obama ignored their plight for his sinister purpose. No one is more evil than Barack Obama for letting Iran kill unhindered hundreds of thousands of innocent Arabs as it plows its way closer to Israel.

Iran is a religion and not a country. U.S. sanctions aim to shrink Iran back to its borders to behave as a country. We should all support this goal.

Iran is a Religion and not a Country