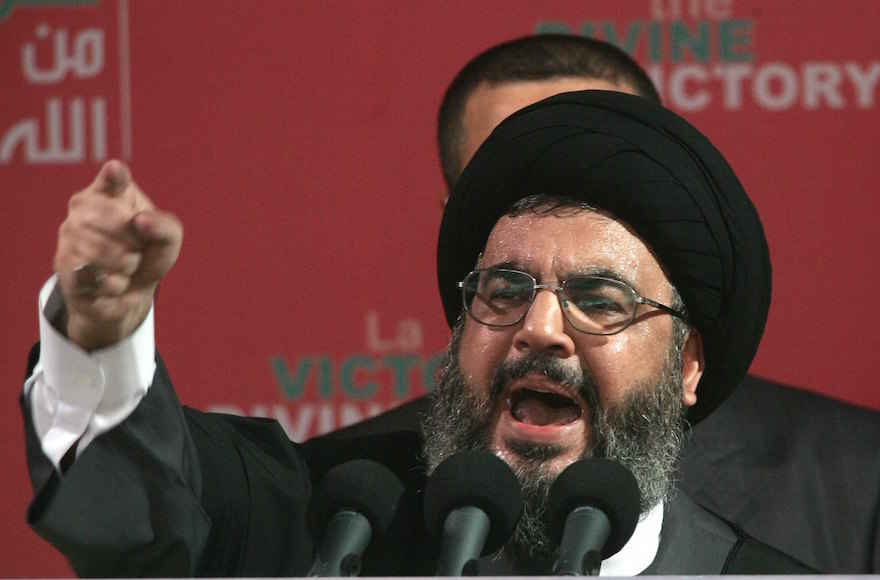 June 17, 2020 4:53 am 0
Hezbollah Terrorists Can Kill But Not Govern
Hezbollah Backs a “Weekend Prime Minister”
Lebanese Army Struggles to Reopen Any Blocked Roads

The head of Hezbollah group on Tuesday said Lebanon should not observe new U.S. sanctions against Syria. Even at the cost of harming Lebanon’s interests, which clearly demonstrate Hezbollah open treason against Lebanon and where the terror group loyalties lie. In Tehran, not Beirut.

BLAME EVERYONE. EXCEPT HEZBOLLAH.

As usual Nasrallah blamed the United States for the dollar shortage in Lebanon, which experts refute. He said Washington is preventing the foreign currency from coming into Lebanon and is pressuring its central bank not to inject fresh amounts into the economy forgetting that Lebanon has no currency to inject because it is on the brink of bankruptcy. He called the dollar crisis “a national security issue,” no longer an economic problem.

Hezbollah controls Lebanon because it installed one its puppet ally as the president of the country.

Lebanon is facing an unprecedented confluence of economic and financial crises — characterized by a severe shortage of dollars and negative economic growth. The crises were compounded by the coronavirus virus pandemic that left the country in a lockdown for weeks and deepened unemployment and inflation. In addition, new U.S. sanctions against Syria, the toughest yet, are due to go into effect Wednesday. The sanctions penalize any country or entity that does business with the Assad regime.

Nasrallah said Lebanon is likely to be deeply hurt if it observes those sanctions, known as the U.S. Caesar Syria Civilian Protection Act. He said Syria is Lebanon’s only land route to the world, so trade would be harmed. Losing the land route with Syria would force Lebanon to turn to Israel, which Nasrallah suggested is the aim of U.S. sanctions and which he said he rejects.

Nasrallah failed to mention Lebanon has a dynamic sea port in Beirut. In reality, Syria represents one trade route of many options.

The Caesar Act does not sanction the delivery of food supplies to Syria.

For Hezbollah, the definition of chaos is to block Assad from bombing hospitals, schools, and markets

The heavily indebted Lebanon is seeking financial assistance from the International Monetary Fund but rounds of talks have not yet produced an agreement.

The new sanctions also undermine the chances any Lebanese companies have to take part in Syria’s reconstruction. They will hamper bilateral trade between the two countries because Hezbollah is backing the Assad regime.

THE CAESAR ACT PAINTS HEZBOLLAH IN A CORNER

In a confrontational, spitefully angry 100-minute televised speech, Nasrallah said the sanctions on Syria aim to create chaos after Damascus emerged victorious in the nine-year war. For Hezbollah, the definition of chaos is to block Assad from bombing hospitals, schools, and markets. The Caesar Act specifically targets Assad for crimes against humanity, which Hezbollah helped him unravel against the Syrian people.

Nasrallah said his group would propose to the Lebanese government to turn to Iran to secure its basic needs, without needing US dollars.Hezbollah receives its marching orders from Iran.

Nasrallah said China is also ready to invest in Lebanon. He added that Hezbollah has other cards to play but didn’t elaborate. Most likely those involve smuggling just as Iran smuggles weapons to Assad.

Turning to Syria, Nasrallah said the sanctions would fail to achieve their desired effects.

Nasrallah said in his speech:

Syria’s allies who stood by it during the military, security and political war— and even if their own conditions are also difficult— they will not give up on Syria in the face of this economic war.

In other words, to hell with Lebanon, our loyalty is to the regime in Iran.