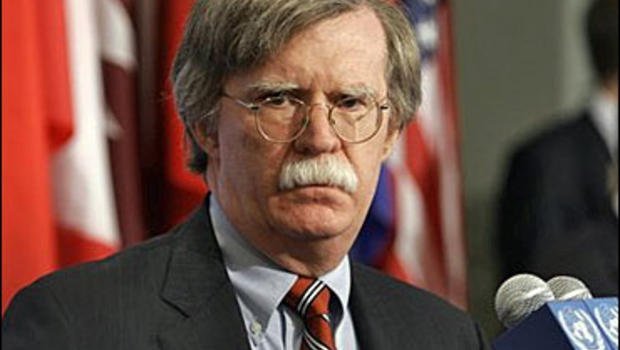 September 26, 2018 9:20 am 0
Who Is Instigating a Turkish-Kurdish Civil War?
Israel Attacks Missile Factory in Hama
Babushka Dolls Goals: Why Syria’s War Will Continue

Britain, China, France, Germany, and Russia said they were determined to develop payment mechanisms to continue trade with Iran; this despite skepticism by many diplomats that this will be possible.

Getting Tough on Europe

Bolton, however, was skeptical that the European Union could create a “special purpose vehicle” – described by diplomats as a sovereign barter channel much like one used by the Soviet Union during the Cold War – that would sustain Iran’s oil sales.

The European Union is strong on rhetoric and weak on follow-through. We will be watching the development of this structure that doesn’t exist yet and has no target date to be created. We do not intend to allow our sanctions to be evaded by Europe or anybody else.

The United States expect Iran’s oil customers to slash their imports of Iranian crude to zero by November 4. U.S. sanctions kick in on November 5.

Banks and financial messaging services such as SWIFT must take a good hard look at their business with Iran and ask themselves whether it is worth the risk. SWIFT should follow the example of a growing number of businesses … that reexamined their dealings with the Iranian regime.

In 2012, the United States barred Iran from SWIFT, the Belgium-based Society for Worldwide Interbank Financial Telecommunication. Lack of access crippled its ability to make international bank transfers crucial to foreign trade. Obama reconnected SWIFT after the 2015 Iran Deal. However, European officials have said they expect the United States to apply pressure on SWIFT to once again cut Iran off.

Meanwhile, a senior UAE official warned Europe it was offering Iran a glimmer of hope by trying to keep trade flowing. He warned against the EU ultimately falling behind the United States’ tough approach on Tehran.

The UAE, Saudi Arabia and Bahrain swiftly backed U.S. President Donald Trump decision in May to withdraw from a 2015 international accord with Iran. The deal left unanswered Iranian terror activities in the region.