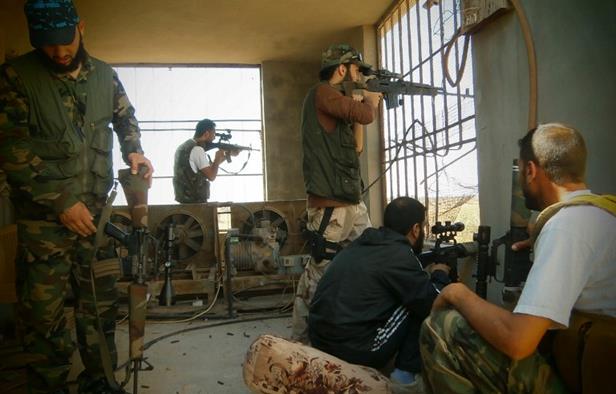 June 9, 2013 7:34 pm 0
Syria: Reported fatwa allows the hungry to eat cats and dogs
Al-Qaeda behind Libya. But Who is Behind al-Qaeda but Iran and Syria?
The Palestinian Grievance Industry

There is a pattern forming in the policies of the Obama Administration, in the way it is intimidating Americans, to include the Benghazi survivors, at the same time it provides the Assad regime, the Iranian Mullahs, and Hezbollah the room to murder and destroy at will. This ought to make everyone uncomfortable.

Americans have become the enemy and the enemies have been welcomed by America even though they remain the terrorists they have always been. With the Obama administration, it is all about intimidating Americans and dialoguing with terrorists.

As Syrian-Americans, we do not even answer our cell phones anymore fearing the tough question: A Syrian FSA moderate calls to seek an answer to “What happened to America?”. An answer we do not have.

What redemption one would expect from an administration’s domestic ill-advised behavior towards its own citizens and a neglectful international course towards terrorists and their state sponsors is hard to fathom.

We blame the media watchdogs who were relentless for holding President Bush accountable, but whose pens went missing under President Obama. When a President knows he can get a free pass no matter his mistakes, it does not surprise many in Washington, which is bristling with scandals today. Especially when the President is a political rookie at best.

Those reporters who protected Obama turned out to be his worst nightmare, something some may have realized, but We are not holding our breath for the worst offenders at MSNBC, NBC, ABC, CBS, CNN, the Washington Post, and the New York Times.

As the decision, taken by Obama not to fully arm the rebels to defeat Assad, had irreparable repercussions on the flaring of sectarianism in the Levant and on an exponential increase in extremism, the fall of Qusayr will have even worse repercussions for US interests in the end. For Obama, intimidating Americans and dialoguing with terrorists are what sets his policies apart.

Even Secretary John Kerry insisting on a peace conference for Syria, and with almost all parties resisting, the conference will have antagonistic repercussions for any serious US peace efforts in the future. We doubt Kerry will hold a Palestinian peace conference after this fiasco in Syria. Smart basketball coaches beat the odds by coaching only those teams with the best players with the best odds to win. Peace conference on Syria when the rebels are begging to defeat America’s enemies? What a scandal!

Obama should have swiftly resolved Syria early on by arming the early FSA defectors we all knew were moderate elements. It would have accelerated defections and would have defeated the biggest evil these lands have witnessed in Assad, Hezbollah, and the Mullahs of Iran.

Have you ever attended a horrible play to include bad acting and bad music? The Obama administration reminds us of such a play. Obama thinks his international policy is fine, just as John Kerry thinks his diplomacy is working. The actors, in reality, never want to know how bad they are, even when told repeatedly by their audiences.