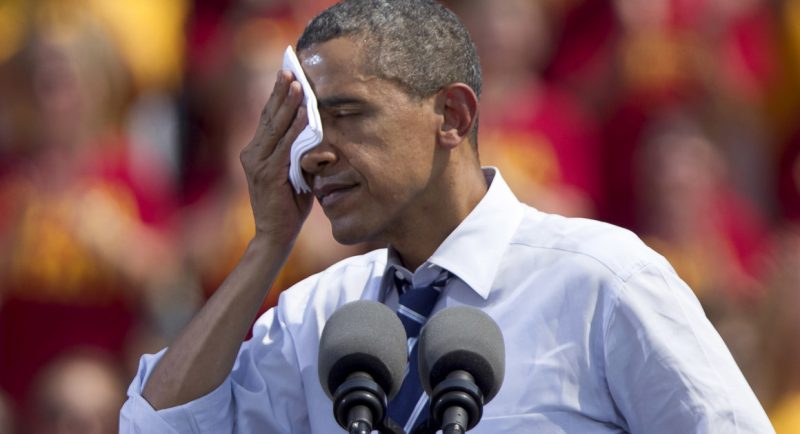 Obama Stands Blameless for a New Class of Extremists in Syria

December 12, 2012 11:02 am 0
Too Much Arab Talk When Action to Save Aleppo is Needed
Russia Ignores ISIS in Aleppo, Concentrates on Moderate Rebels
Syria Rebels Attack Government Intelligence Center in Aleppo

In Iraq, President Bush helped free a country from a ruthless ruler who threatened the whole region with WMD; and in fact used WMD against his own people.

In Syria, Obama ignored the plight of the Syrian people; including delivering directly any kind of humanitarian aid.

Iraq, Iran, and Syria terrorized American troops. In response, Speaker Pelosi chided her Republican President for the war. She also paid a complementary visit to Assad in April 2007 — who was still hunting Americans troops –, and refused to blame Syria and Iran for the terror in Iraq (Still refusing to blame Assad for his butchery even today).

For Syria, President Obama has only threatened Assad if he used chemical weapons, not if he kills widely using carpet bombing of civilian targets or even the Phosphorous bomb considered by many experts to be a chemical weapon. He also refused to take advantage of the Revolution in Syria to accelerate the demise of Assad, a sworn enemy of the US. In fact, Obama is pursuing a solution where Assad could still rule Syria (Hillary Clinton is negotiating with the Russians. As we write this).

Are you seeing a pattern here? One far left Democratic leader does not blame Assad, the other, even further to the left, does not remove him when offered the best opportunity to do so. Obama stands blameless for a new class of extremists in Syria.

Is it possible neither of them wants to find that precious WMD cargo Saddam shipped to Syria just before the war broke out in 2003?

Compare that to Iraq where President Bush did what was right in defending the human rights of Iraqis. Think how the Democratic machine just went after him instead of standing by him when American lives were at stake. Even some Republicans today cannot find the courage to defend President Bush for Iraq; even as they watch the tragedy in Syria unfold. But given the new class of terrorists Obama has fathered in Syria, everyone will start paying attention soon.

Obama’s policy on Syria has empowered a new young generation of extremists. They have already begun to rule Syria as if they were in Afghanistan. Obama stands blameless for a new class of extremists in Syria.

Here is a snippet from a Syrian observing what is taking place with this new class of extremists.

We see a shift toward Islamicization of the ideology of the people who are fighting on the ground, which is a concern. They’re more cohesive as a group and that’s a problem because it’s radicalizing young people who want to be part of a military campaign against the regime, against a minority in Syria and they eventually adopt the more radical view.

We see in Aleppo city now they’ve installed an Islamic court and a police of vice and virtue which means people, civilians, are being tried for moral crimes.

In response, this is what Ms. Nuland, spokeswoman for the US State Department said:

This, again, goes to the environment that Assad and his regime have created with their violence – that they have, as we have been concerned about for many months, created an environment with this violence which extremists can now try to exploit.

Obama’s lack of resolve in arming the more liberal FSA to fight Assad has led to extremists nesting in Syria.

Syria will cost America much chagrin in the future and even possibly American lives and materials. Don’t expect Obama to take responsibility for his lack of action in Syria. Obama has already started pointing the fingers at Assad.

If not Bush, it’s Assad. But never Pelosi or Obama.

Obama Stands Blameless for a New Class of Extremists in Syria