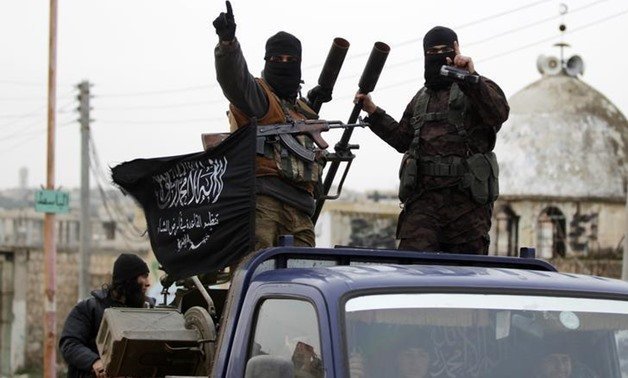 Mirror, Mirror on Syria, Who Has Released Jabhat al-Nusra Bacteria?

December 13, 2012 3:26 am 0
Little Signs Assad Is Losing Even With Russian Help
Assad starving Ghouta, after gassing it in 2013
Behind The Lines: Assad’s North Korean Connection

It takes practice to live without regret, but only regret provides the experience of a practice. When voted-for-office leaders start regretting their decisions, most likely it is the voters who will pay the ultimate price. As far as we are concerned, the Obama Syrian policy is that firmament moment in politics when you see, hear, and feel trouble for America in the not-so-far distance. Time for Obama to ask: Mirror, mirror on Syria, who has released Jabhat al-Nusra bacteria? You did, Mr. President.

Jabhat al-Nusra, a 1,000 plus loose bunch of organic fighters as well as foreign Salafist fighters, was recently shoved through the express lane leading to the notorious labeling of a “Terrorist Organization” by the US Government and its many supervising branches. To fully understand the Obama ill-advised policy on Syria and its most recent denunciation of JAN, one must first understand the dynamics leading to JAN as much as what it’s labeling will lead to or mean.

JAN is a bacteria that will destroy Syria socially and economically. However, what led to this bacteria getting released in the open is extremely important to understand.

But first, some facts are in order.

Fact One: The two most popular organizations fighting inside Syria are the Free Syrian Army (FSA) and Jabhat al-Nusra (JAN). Both are fighting against Assad and both are the ones winning their battles and capturing air bases and military equipment, including SA-16’s , tanks, and heavy artillery. JAN is also deploying suicide bombs against Assad centers of power.

Fact Two: On the periphery are fighting units who follow the Muslim Brotherhood like Liwa’a al-Tawhid promoted by the Arab League and specifically Qatar. The FSA is so much more popular in Syria than the MB, al-Jazeera has started a campaign to discredit the FSA by using who else but MB followers to do the discrediting.

Fact Three: Simultaneously, the US has discredited JAN the way the Arab League is attempting, unsuccessfully, to discredit the FSA; again, both are the two most popular organizations fighting in Syria today in terms of raw street support.

Fact Four: The FSA and JAN are co-existing because the FSA needs JAN fighting prowess (72 virgins not withstanding) to defeat Assad after Obama ignored so many pleas to arm the liberal units of the FSA.

Three different groups are fighting. However, only the two most popular organizations are the ones the US and the Arab League are trying to defeat in the international court of public opinion.

Obama’s policy on Syria is backfiring so quickly that this administration is now resorting to pushing too many panic buttons at the same time. The public-at-large is totally in the dark as to what all of this means. Mirror, mirror on Syria, who has released Jabhat al-Nusra bacteria? You did, Mr. President.

As Obama starts betting against the Syrian street (by discrediting JAN), he opens the door even further to collectively positioning all Syrians who stand against Assad also stand against America. That anti-Americanism was starting to coalesce after Syrians waited patiently for the US to come to their aid with real support the way the US aided the Libyans defeat Moammar al-Qaddafi. Syrians did not understand fully Obama’s apathy towards them but they were willing to give him the benefit of the doubt as they took matters in their own hands to fight Assad.

Some six months ago, I was starting to hear anti-American complaints every time I discussed US policy on Syria with the FSA or Skyped with the dissidents inside Syria in touch directly with those fighting. Their complaints were due mostly for the lack of American assistance. We preached patience as well as the message that things may change after the elections.

WHAT DID SYRIANS GET AFTER THE U.S. ELECTIONS?

Obama labeling JAN as a terrorist organization, which was necessary if you are sitting at the US State Department and watching matters get out of control so rapidly (In the aftermath of Benghazi, panic is the policy).

But no one has computed what this all means to the Syrian people, which essentially sends this message:

“Not only Obama did not help us, but he is trying to stop those who are really helping us”

Starving and dying Syrians could care less about what JAN’s religious agenda is, all they see are people fighting on their behalf when America did not. Obama missed his chance. He should have listened to Senator John McCain with so much more experience on foreign policy.

Mirror, mirror on Syria, who has released Jabhat al-Nusra bacteria? You did, Mr. President.

Syria, as of two days ago, may have become a sea of anti-Americanism. All the good deeds of Ambassadors Ford and Feltman, Obama lost in matters of days. It happened because of two reasons:

That last fact was established when we all read or watched on TV how our Director of Intelligence James Clapper discussed the secularism of the Muslim Brotherhood. Or, we witnessed it when the Fort Hood act of terror was ignored as domestic Islamic terror. You could sense that this administration felt it just killed terror against America by going against the policies of Bush.

Further, this administration has decided that if it killed Bin Laden, it would have effectively killed al-Qaeda. Obama would have eradicated Islamic terror all together. Benghazi was the first reminder of how arrogance and ignorance can be a disastrous combination in a leader. Syria is the second reminder on a much, much larger scale. Mirror, mirror on Syria, who has released Jabhat al-Nusra bacteria? You did, Mr. President.

As far as we are concerned, there is nothing worse than arrogance and ignorance combined in a leader, especially when they are not willing to learn from their own mistakes. Churchill words resonate “Courage is also when you sit down and listen”. The US had to act against JAN, but it could have avoided the release of its bacteria had Obama listened.

Not only Syria is destroyed, but its people may yet become a nightmare for America. Why? Because Obama refused to act in 2011 when US interests were screaming for him to act on Syria.

Mirror, Mirror on Syria, Who Has Released Jabhat al-Nusra Bacteria?