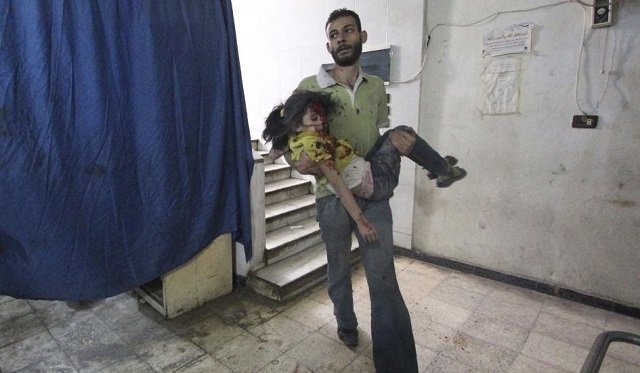 August 16, 2015 5:20 pm 0
How Will Assad Be Held Accountable For Crimes Against Humanity?
Saving Syria Is No Fantasy
Qardaha Hospital Struck by Suicide Truck Bomb

TFS Note: We have but Barack Obama to thank for the Assad atrocities and whose Iran deal will give terrorists more targets and more room to kill civilians. To say that Barack Obama is a bad man does not even fit the description of who he really is.

Source: The Independent – by Adam Withnall (Syrian defectors reveal horrors of life under Bashar al-Assad’s regime in reminder for West to ‘not just focus on fighting Isis’)

Experts have warned that the Isis militant group cannot be beaten without regime change in Syria, after a group of defectors revealed the horrors they had witnessed at the hands of Bashar al-Assad’s government.

Speaking to Germany’s Bild am Sonntag, a doctor, a pathologist, a judge and a chemical weapons official from within the Syrian regime spoke about the atrocities they saw committed – and their frustration at the lack of attention from the international community.

One defector, identified as 44-year-old Dr Mohamad F., was a coroner at the University Hospital in Aleppo until he tried to flee and was arrested on charges of being “a terrorist threat”.

“I have suffered, but it’s nothing compared to the pain other prisoners have gone through. I have seen policemen rape women and children in front of other detainees.”

Dr Abed Tawab Shahrour, 50, then the university’s chief pathologist, told Bild he had witnessed and documented repeated evidence of the use of chemical weapons by the Assad regime. He said he had testified for an hour to the International Court of Justice in The Hague, and was amazed nothing was being done to intervene.

“I’ve seen bodies turned blue, people foaming at the mouth who have died in agony, choking to death,” he said. “I have seen more than 3,000 victims of cold-blooded murder. All of them died a senseless death.”

Bild also spoke to a judge who was ordered to send demonstrators – including children – to jail, and that “the accusation should always be ‘terrorism’”.

And Brigadier General Zaher al-Saket, the former head of the Chemical Weapons Research Centre of the 5th Division of the Syrian military, told the newspaper only Assad had the authority to approve chemical attacks – and that he still has half his nerve gas stockpile.

“To my knowledge, the regime continues to use chlorine gas and chloroacetophenone,” he said. “Bashar doesn’t even have to sign off on it anymore.”

Speaking to The Independent, Dr Andreas Krieg from King’s College’s Department of Defence Studies said the defectors’ testimony was a stark reminder of the need for the West to “not just focus on fighting isis”.

“Five years of apathy have created the situation we find ourselves in at the moment,” he said.

“Forgetting about the institutionalized atrocities of the Assad regime only aggravates the situation on the ground. Bombing Isis from the air while turning a blind eye to Assad will just slightly shift the balance of power in Syria – where the civilian population is effectively trapped between the Assad regime and Isis.

“The removal of Isis necessitates the removal of Assad and a positive long-term engagement with moderate rebel groups including moderate Islamist groups. Because only these groups can actually make a difference for the population on the ground.”