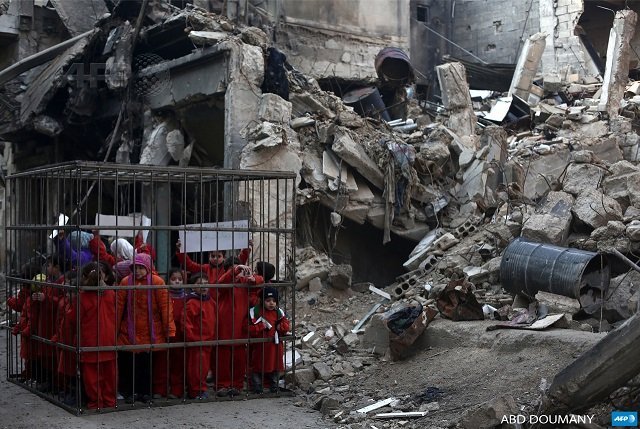 Obama’s Iran Deal From Hell is Playing in Syria

August 17, 2015 7:50 am 0
Saudi Arabia Can Stop the Iran Deal if …
Meat, Bones, and Crumbs
The Unbiased Guide to Understanding The Civil War in Syria

The Obama Iran deal has emboldened Assad of Syria. It has emboldened him to kill more civilians as the world witnessed yesterday in Douma, a Damascus outskirt.

CNN titled it “Airstrikes rain death and injury on Syrian town“. These are the airstrikes that only an Obama Iran deal from hell can produce. Some 100 civilians died and 300 were injured. All were civilians shopping in a marketplace, not fighters hiding in some destroyed buildings.

If you want to know what a savage Baschar al-Assad is, then read this: He attacked Douma with his Russian military jets during a visit by U.N. humanitarian chief Stephen O’Brien who must have had a wake-up call as to who he is dealing with.

O’Brien, during a press conference in Damascus, told reporters:

“I am horrified by the total disrespect for civilian life in this conflict,”

Welcome to the world of Assad Iran and Russia want the Syrian people to kneel to, while Obama helps them both with his Iran deal from hell. If you want to learn how to kill civilians by the thousands, just watch Russia protect, Iran supply, Obama ignore, and Assad kill.

Is there something the Syrian people can do to spurn these deadly attacks? The West refuses to equip the rebels with anti-aircraft batteries or missiles to down these jets that most likely are being manned by Russian pilots considering the number of sorties (Over 5,000 sorties so far in August) and the efficiency of a new killing machine in the Syrian Air Force.

Can you imagine American F-16’s attacking Washington DC area of Georgetown? This is what Assad is doing. Killing civilians with military jets able to rain fire and death.

The magic of Obama’s Iran deal from hell can be watched in Syria where one can see what might happen when one empowers men of extreme violence whose understanding of the value of life was an initiation in taking that life.

With Obama’s Iran deal from hell, he has sealed the fate of Syria by destroying it completely. Of course, when his Iran deal from hell finishes Syria, you will see Obama stand on some podium in the future and tell us that Syria no longer exists because of George Bush. This is what cowards do. They always find a way to remain blameless.

Obama’s Iran deal from hell is playing in Syria with all its glory for Obama to enjoy and all its goriness for Syria’s civilian life to endure. No one in this White House is able to compute that when you give extreme men of violence everything they asked for, it does not turn them into Bambis. All it does is highlight their violence to the disgust of everyone else.

Barack Obama probably thinks he is above it all. His godliness does not permit him to have any misgivings over his rightful control of human life.

History will not absolve Barack Obama from his role in the Syrian Genocide.

Obama’s Iran Deal From Hell is Playing in Syria

Loading...
Newer Post
Russia, Iran Back Assad Despite Regime is Magnet for Terror
Older Post
Syrian defectors reveal horrors of life under Bashar al-Assad’s regime in reminder for West to ‘not just focus on fighting Isis’