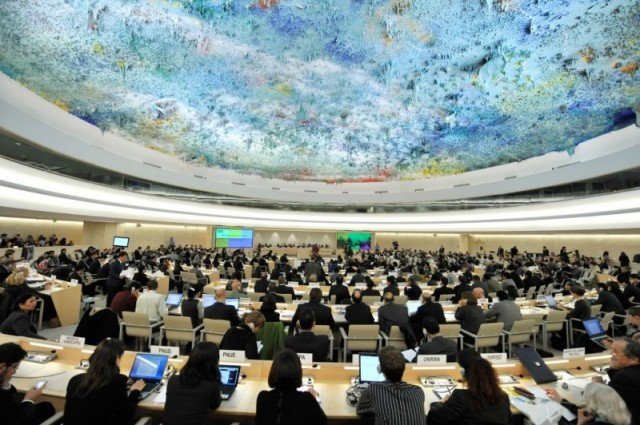 Why the UN elects repressive regimes?

April 24, 2014 11:50 am 0
Beware ISIS strategy that fortifies Russia, Iran, and Syria
Neither al-Qaeda nor Assad
What Will Change Iran Situation?

According to UN Watch, the United Nations has elected today some unsavory human rights abusers to govern over the very human rights institutions supposedly set-up to protect people across the globe.

Why the UN elects repressive regimes?

Some of the countries elected were Sudan whose leader Omar al-Bashir has been indicted by the International Criminal Court and a warrant for his arrest issued on March 4, 2009; yet, Mr. al-Bashir?s who still lives larger than life has been tasked, indirectly, by the UN to protect the human rights of others.

Other countries who were elected were Iran, Russia, Cuba, and Mauritania, which according to UN Watch have stacked the deck against human rights at the UN. Hillel Neuer of UN Watch declared:

?The very UN committee that is meant to judge our complaint against this dangerous?front group?is now stacked more than ever before?by?China, Sudan and their non-democratic allies, who?control some 70 percent of the seats. When the criminals are made the judges — the arsonists named as fire-fighters –?it’s a travesty of justice. The crucial?role of civil society within the world body is being eroded, its voice at risk of being silenced,”

“Tragically, the UN’s election today of?regimes such as Iran, Sudan and Mauritania — governments that rape and torture?political prisoners, subjugate women, and commit crimes against humanity from slavery to genocide?– sends a message that crass politics trumps basic human rights. The UN is letting down millions of victims around the globe who look to the world body for vital protection?

From afar, these seem like boneheaded decisions, something our President would declare if he wanted to cover-up another scandal. However, when one looks closely at these decisions, it becomes clear why the UN elects human rights abusers; it is not as strange as everyone seems to think.

Some folks running the United Nations our President admires, and I mean some, believe that the UN gets stronger and more powerful ONLY if humanitarian crisis across the globe keep surfacing and humanity suffers the consequences of direct or indirect evil (hello climate control).

The Syrian humanitarian crisis, for example, is a Godsend crisis to the UN because it permitted the organization to raise its profile as the only problem solver willing to take charge. It also permitted it to raise billions of dollars from rich Arab Gulf countries, as well as feed the masses the notion that without the UN, the world would simply be a far worse place. The latter notion is the single most important message the UN leadership wants to control, and the fact the UN was helpless in stopping the killing in Syria or Darfur speaks volumes about the UN?s real mission statement, which I believe could be summarized in these words: The more blood spills, the more powerful we become.

There is no doubt that many at the UN do exceptional work; many humanists working the details of every crisis are heroes in every sense of the word. These middle and upper middle managers committed to peace and better standards of life for all are fed hogwash as to the reasons why electing Iran to a human right position of power is necessary. The real reason is to empower Iran to do worse just so the UN can claim the high road jumping from one crisis to another with the aim of increasing its influence and filling the vacuum abandoned by many Governments across the world unable or unwilling to cope with solving global or distant issues on their own.

The UN global ambitions is to become a one-stop shop for any humanitarian crisis and eventually lead the world the way the EU leads Europe. To reach that goal, it deceives its middle managers and the masses by empowering those willing to spark deadly catastrophes. If Assad of Syria survives the civil war, the UN will soon elect Syria to one of those seats of trust.

In reality, Assad is a dream come true for the UN, and I have no doubt some of the evil men and women running the UN have grand plans to reward him in the future the way they are rewarding the butcher of Darfur today. Good job making our marketing easier old chap says the UN to Omar al-Bashir. Sit here and enjoy!

The more savagery these repressive regimes commit, the shorter the route to the UN ultimate goal. Without them, the UN would eventually fade. If people do not commit crimes, we would not have a police force. These repressive regimes must continue to abuse human rights for the UN to strive and prosper along their side.

Like a vampire, the UN must drink blood to claim it protects us from the diseases our blood may spread. Why else would some of the evil people at the UN elect human rights abusers with a detestable history to protect human rights?

Would you trust an unrepenting sex offender to baby sit your child in order to show him there are better ways to live? Believe or not, that is the UN high command selling message to their good middle managers and the good, but innocent, people working at the UN.