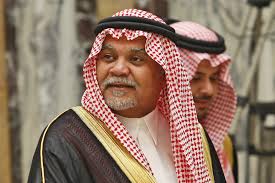 Bandar bin Sultan, the Saudi official behind the hawkish stand of toppling Baschar al-Assad by any means possible, has resigned his post of Saudi Intelligence Chief. At least, this is the public story being sold.

There is more to Bandar quitting.

Unlike Petraeus though, there were no email scandals to speak off even though the pressure mounting against Bandar?s tough stand came from the same sources. Silencing critics is President Obama?s signature achievement as Commander-in-Chief, and the most successful.

As the US rapprochement with Iran has gained tracks unto an administration still believing evil is a biblical notion, the consequences seem to hit the hardest all US allies in the MENA region. Hawkish figures in Israel and the Arab Gulf unwilling to accept the Mullahs hegemony and/or terror have come under extreme pressure from the Obama White House intent on silencing their non-IRS, tax-filing critics. Chicago-style arm twisting diplomacy seems to have become the norm under President Obama where foreign dignitaries are concerned

Those who believe, like Hassan Nasrallah and his cohorts in Damascus and Iran, we have heard the last from Bandar should, in my opinion, reconsider their position. Bandar, whom I know personally, is twice gifted with traces of DNA from his mother and his al-Sudeiri grandmother, both of whom had to confront difficult inter-palace intrigues to survive and prosper. In fact, in the mid-nineties, Hezbollah assigned Imad Mughneyieh the task of assassinating Bandar bin Sultan, and yet the grave of one of those men reads Mughneyieh, not Bandar. No doubt, Mughneyieh was a worthy foe, which says a lot about the last man standing.

The White House, under this administration, can celebrate its beguile practices quietly, but here is an al-Saud detail President Obama missed. Since intelligence and security in the Gulf are imminent domains assigned only to the ruling families, Bandar?s replacement is not royal blood, which is al-Saud way of hanging the sign “Temporary, Mr. Obama” on their Embassy doors in Washington DC.

If I were a betting man, I would bet Bandar would be back on the job if either GOP wins the Senate in 2014 or another scandal breaks in Washington. Obama’s lameness will be confronted differently next time.