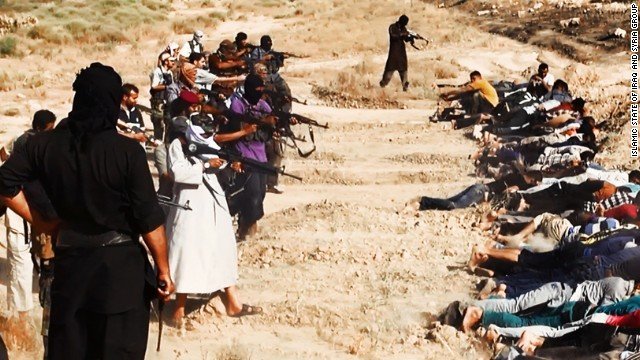 Does it look to you as if the Middle East has turned into one big asylum with crazies galloping all over the region with their guns blazing? I mean, look around you. Everyone is killing everyone. At least during President Bush, the asylum had guards and nurses with medicine cabinets to keep everyone in line.

I truly feel for Israel, the little house on the prairie caught in the middle. Teaching Hamas a lesson they would never forget is something many Muslims thank Israel for its sacrifices. We are all tired of watching our next Bill Gates or Albert Einstein melt in the violence and terror of us Muslims.

The biggest and the meanest nut job in this asylum is, by far, the big bully Iran, followed closely by the mass murderer Assad, as well as Hamas, the idiotic disciple of Iran, helping itself to self-destruct. ISIS, a deranged child born from the conjugation of Khamenei and Assad, is a perfect example of why we should separate Syria from Iran by removing Assad from power. Their child is so demented, they both lost control of him.

ISIS considers everyone its enemy, even Muslims who refuse to settle in its Stone Age caves. Obama is doing everyone a favor by limiting ISIS capacity to spread its virus across many countries; however, as Obama made a mistake in Syria that led to a door-opened Asylum, he is making another mistake by only striking ISIS. Allow me to explain.

Ask yourself what makes ISIS successful. Why did Assad lose control of ISIS? The answer lies in ISIS capacity to recruit fighters for its cause. Foot soldiers are the most important element extending its life and hoofprint. ISIS got out of Assad’s control because he was certain he could continue to massacre Sunni Muslims and manipulate Sunni extremists at the same time. Never in the history of the Assad family had they had to juggle that aspect of their tactics on such a large and observable theater.

The same reason Assad lost control of ISIS will apply as long as Obama strikes it without striking the terror of Assad who continues to kill Sunni civilians. In the eyes of many Sunnis, extremist and non-extremist, Obama is fighting on the same side of Assad, which makes him in the eyes of Sunni Arabs, Assad Deux. This is why ISIS will survive and prosper but in a different form.

Besides the committed fighters, ISIS sympathizers are increasing in numbers and scope. Reliable sources in the Middle East have confirmed that ISIS recruited 6,300 fighters in July; however, we have no clue how many sympathizers it has recruited. Now that Obama is attacking ISIS without attacking Assad, the number will swell in the coming months. Many will not make themselves known. They will be ISIS dormant sympathizers across many of the Arab countries, and this is why ISIS will survive and become far more dangerous.

In a way, what Obama is doing today is making ISIS far more lethal with its best resources for terror developing underground. Even countries in Southeast Asia are concerned about ISIS recruiting prowess. Had Obama chosen a neutral Arab?American adviser whose ears are to the ground, he/she would have counseled him against striking extremist Sunnis and letting the extremist Shia off the hook.

Back in the spring of 2012, one year into a peaceful uprising that turned violent on both sides, I warned the Obama Administration, through an indirect adviser, that if the US did not arm the Free Syrian Army defectors, the extremists would eventually take over and recruit from the pool of the moderates fighting Assad. It happened exactly as I predicted.

Today, I predict that unless Obama strikes Assad at the same time he is successfully striking ISIS to show that the US is not taking sides, ISIS organic growth will shock us a year from now.

Stable Arab countries like Saudi Arabia and Jordan will be affected the most, as well as North African countries primed to follow a Muslim cause. As such, it is important for the Arab League to respond to Obama?s lack of experience by warning against his policy openly and without any reserve.

The Arab League needs to pressure Obama against striking ISIS only. Eventually, Iran will use ISIS as they used Hamas and al-Qaeda but this time around, the IRGC will use them against Saudi Arabia and Bahrain where their roots would become deep and flourishing.

As Bandar bin Sultan put it best (Not verbatim), “It is about your self-interests, not your friendships”. The Arab League must act in its best interest to call Obama publicly from making another deadly mistake.