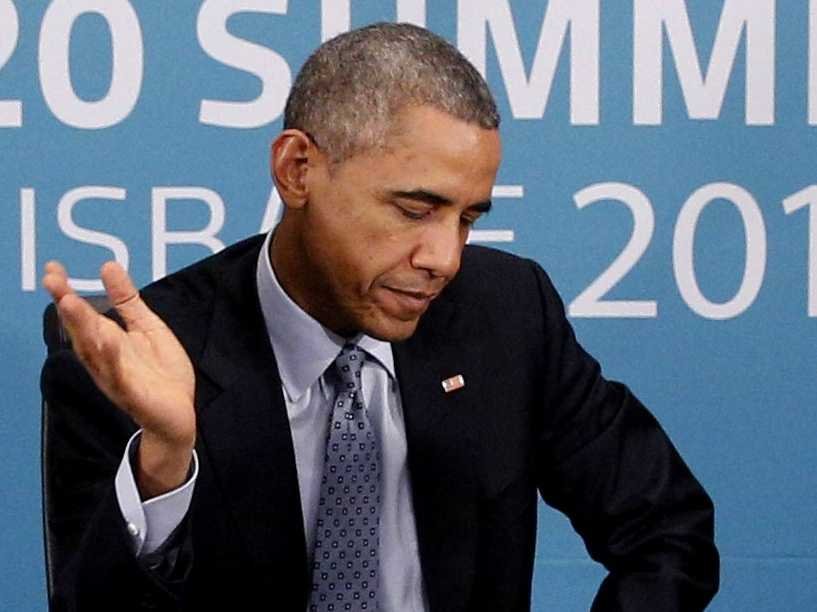 Source: Business Insider – by Natasha Bertrand and Michael B. Kelly

While the US embassy in Syria accuses Syrian Bashar Assad of acting as an air force for the Islamic State, the Obama administration does not seem to be concerning itself with the Syrian regime.

“The president feels very strongly that the very significant problems that are faced by people in Syria, for example, are not problems that the United States is going to come in and solve for them,”White House Press Secretary Josh Earnest said recently.

It’s becoming clear that the Obama administration’s determination to secure a nuclear deal with Iran most likely informed its decision to refrain from intervening in the Syrian civil war.

‘An Iranian sphere of influence’

“The administration’s Syria policy has been predicated on the White House’s desire for a deal with Iran and its care to accommodate Iranian interests in Syria, which he [Obama] saw as an Iranian sphere of influence,” Tony Badran, a research fellow at the Foundation for Defense of Democracies, told Business Insider via email.

The pattern has been emerging for years, and it has accelerated ever since Assad crossed Obama’s supposed “red line” by using chemical weapons to kill 1,500 people in August 2013.

After Obama announced on August 31, 2013, that he had decided to launch limited airstrikes inside Syria, based on congressional approval, Iran “embarked on a PR offensive,” Badran said, threatening to retaliate against America and Israel if any US-led attempts were made on Assad’s life.

The Obama administration subsequently began characterizing Iran not only as a useful buffer between the US and Syria — the US reportedly urged both Iran and Russia to “reinforce” the US’ warnings to Assad — but also as a potential partner in getting Assad to stop slaughtering his people.

Throughout this period, the administration “may have been signaling to Tehran it had no desire to escalate beyond ‘limited and proportionate’ strikes related exclusively to Assad’s use of chemical weapons,” Badran said.

The strikes never happened as approval within Congress was low and the US accepted a Russian-backed deal to remove Assad’s chemical weapons in return for not enforcing Obama’s red line.

The Syrian civil war broke out in March 2011 after Assad responded to peaceful protests with tanks and bombs. By 2012, Saudi Arabia, Turkey, and Jordan were imploring Washington to counter Iranian intervention in Syria.

But Obama rejected a recommendation to arm and equip Syrian rebels in Jordan, even thoughit was supported by key officials, including CIA director Gen. David Petraeus, Defense Secretary Leon Panetta, Secretary of State Hillary Clinton, and Chairman of the Joint Chiefs of Staff Martin Dempsey.

“Had the requisite assistance started flowing [in 2012], both Syria and Iraq would be in better places now,” Fred Hof, a former special adviser for transition in Syria under Clinton while she was secretary of state, wrote last year.

Questions arose about what had motivated Obama to deny the rebels weapons and training — questions that later reemerged when he retreated so readily from his infamous “red line” in 2013.

“But one motive was never included in the list,” Michael Doran, former deputy assistant secretary of defense and a former senior director of the National Security Council, wrote inMosaic. “Namely, his fear of antagonizing Iran.

“For the longest time, it was simply assumed that Obama drew no connection between his Iran policy and his Syria policy,” Doran wrote. “This, however, was not the case. In fact, just as, from the beginning, he [Obama] showed deference to Iran on the nuclear front, he showed the same deference to the Iranian interest in Syria.”

Badran noted that when Obama did move to intervene against the Islamic State, also known as ISIS, ISIL, or Daesh, “he reportedly sent letters to Iran’s supreme leader reassuring him that Assad would not be touched.”

Tehran could ‘precipitate a crisis that would corner the White House’

The US began training a small group of Syrian rebels in early May on the condition that they focus solely on defeating ISIS, The Wall Street Journal reported.

And 1,000 fighters are already threatening to quit the training program, frustrated with Washington’s insistence that they leave Assad alone.

“We got this request to promise not to use any of our training against Assad,” Syrian rebel Mustapha Sejari told Michael Weiss of The Daily Beast. “A Department of Defense liaison officer … told us, ‘We got this money from Congress for a program to fight ISIS only.’ This reason was not convincing for me. So we said no.”

And US reluctance isn’t a matter of lacking intelligence, according to rebels who have worked with the CIA in Turkey.

“The American intelligence services have a fair idea who the good guys and bad guys are in Syria and they know which groups are fighting both extremism and dictatorship,” Sejari said.”If the Obama administration were sincere in putting an end to the suffering of the Syrian people, they could do that in three months.”

As Badran sees it, the president — knowing that Tehran could “precipitate a crisis that would corner the White House,” derail negotiations, and sabotage any hope for an opening with Iranian President Hassan Rouhani — never had any intention of intervening against Assad, which may be why he capitulated so quickly when Russia offered to oversee the destruction of Syria’s chemical weapons in September 2013.

‘We knew of sites that Assad didn’t declare’

On June 23, 2014, the last of Assad’s declared chemical weapons were supposedly shipped out of Syria for destruction. Earlier this month, however, traces of sarin-type chemical weapons and ricin-type biological weapons were found by inspectors at sites the Assad regime had failed to report to the Organization for the Prohibition of Chemical Weapons.

Even worse, the Obama administration knew about the undeclared sites.

“We knew of sites that Assad didn’t declare,” a senior intelligence official told Bloomberg. “It’s a balancing act. You want to do something to get rid of it, but you also don’t want to show them all your cards.”

Assad is flouting the spirit of the agreement in other ways as well. Human Rights Watch reportsthat Assad is dropping steel barrels filled with shrapnel and chlorine on civilian populations at a rate that is increasing.

It remains unlikely that the White House will hold Assad accountable for the barrel bombs, either.

“It is true that we’ve seen reports about the use of chlorine in bombs that had the effect of chemical weapons,” Obama said at Camp David earlier this month. “Chlorine itself historically has not been listed as a chemical weapon.”

‘Making this Daesh come out’

Even airstrikes for Syrian rebels fighting ISIS are not on the table.

“The Syrian-American community asked the Obama administration for airstrikes on ISIS near Marea many months ago,” Mohammed al-Ghanem, the senior political adviser for the Syrian American Council, told The Daily Beast. “We were rebuffed for the astounding reason that aiding the rebels in Aleppo would hurt Assad, which would anger the Iranians, who might then turn up the heat on US troops in Iraq.”

Ibrahim Hamidi, a journalist and political analyst from the restive Syrian province of Idlib, told The New York Times that the US-led campaign was actually driving Syrians into the arms of ISIS by attacking the Sunni terror group while ignoring Assad’s bombing of Sunnis.

“The coalition is scratching the skin and making this Daesh come out,” Hamidi said.