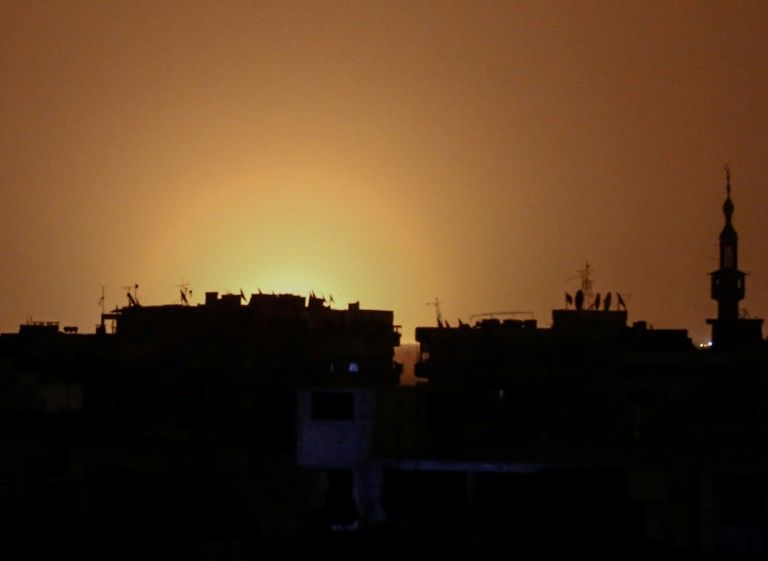 June 16, 2019 7:05 am 0
John Kerry Shows the World the Idiot He Is
Assad Blocking United Nations Douma Entry Using Terror
Is Obama Pressuring Pakistan to Save His Iran Deal?

A mysterious blast rocks Damascus residents say it took place in a rocky mountainous area between Dummar and Qudsaya, where large army units are stationed.

The Assad government claims wildfires nearby caused an ammunition depot to explode in a military zone.

An ammunition depot caused by wildfires?

Or, a rocky mountainous area where troops are stationed and casualties are inevitable?

In recent months, the Assad regime has been re-integrating Free Syrian Army units who defected back into the regime fighting units.

Could some FSA fighter, whose family Assad burned with phosphorous, be behind the blast? An act of sabotage?

Or could Israel be behind the blast?

Asked about the incident, an Israeli military spokeswoman said: “We don’t comment on foreign reports.”

How come the regime did not try and fight these wildfires before they reached an ammunition depot with great value to a bankrupt government?

One of Hezbollah’s military tactics to mask its assets is to carve long tunnels in mountains to hide ammunition and gear.

Did Israel take out one of those tunnels, or is someone, on the inside, sabotaging Assad’s capabilities to wage wars?

WHAT ABOUT THE CASUALTIES

What about the casualties? How come state television did not mention any stats with regard to casualties?

Is it because most are foreign? Like Iranians, Iraqis, or Lebanese fighting for Assad? Which means let those countries deal with explaining their deaths to their next of kin?

Or is it because there were none mostly due to the fact it was really an unguarded ammunition depot?

Or maybe there is a third theory that very few know about.

No matter how one dissects this mysterious blast to rock Damascus, it demonstrates one inalienable fact.

The Assad regime is not in control of its destiny, its assets, or the war.

The enemies Assad has made in the last 8 years are too many to discount any one theory. Besides Russia, Iran, and demonic  Iraqi politicians, Assad has no friends to count on.

Even his friend Bashir of Sudan is heading to trial for mass crimes months after visiting Assad in Damascus.

The luck of the Assads. Their curse spreads like the plague.

We shall soon find out about the reality of this mysterious blast.

Possible Doomsday for the Assad Evil Regime
Are Advanced Stinger Missiles Next Phase in Syria?
100 killed in week of clashes in south Syria
Syria News 1166