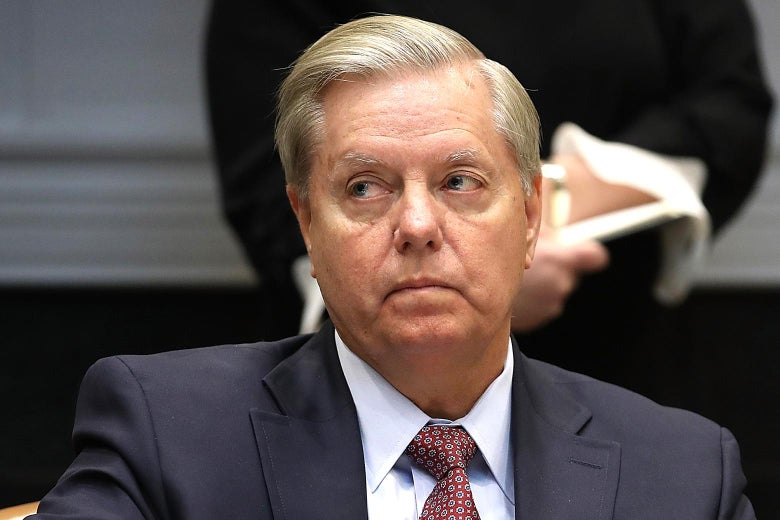 Upon rising this morning in a glorious mood, Falafel thought to himself the time has come to interview a stalwart voice of the GOP in the mobster-world like of Donald Trump every American is suffering through. Who else but the Senator from North Carolina Falafel remembered thinking. He, along with late Senator John McCain, fought tooth and nail to lend a hand to the Free Syrian Army during the nightmarish era of Barack Obama hell bent on arming the Mullahs in Tehran to destroy Israel. With his powerful pen in hand, Falafel interviews Senator Lindsey Graham.

Falafel likes Senator Graham. He thinks fondly of him when in 2011 he stood courageously against the foreign policies of Barack Obama. Had Obama listened to the Senator, he would be nursing today a different legacy than that of a wimpy president.

Upon arriving, Falafel found Senator Graham still fuming over Donald Trump comment of seeking foreign help against his opponents and not bother to tell the FBI if he was contacted by such power.

Falafel entered his office at the Russell Senate Building and sat across the Senator’s desk in a comfortable chair.

Falafel: Good morning Senator, I see that you are still upset over the comments of our commander-in-chief.

Falafel: I hear you Senator. Can you translate that into something I can write?

Falafel: I gather you are upset over what Donald Trump is doing to the Republican brand.

Graham: Off the record, the man is a total knobhead, a shitbag, and an arsebadger. He can’t keep his mouth shut. How did he become such a famous household name in the first place? A swallow, still hatching, is smarter than Donald Trump.

Falafel: Please let me know when you are off the record so that I can start writing.

Graham: How did all those dumb people vote him into office?

Falafel: I am ready Senator to go on record.

Graham: Did you know that this miserable son of a bitch got 2,362,631 N. Carolinan votes? I know my people. The mistake they made is gargantuan.

Falafel: Don’t blame your people Senator. It was the Barack Obama after-effect. Americans wanted a president in office who told it like it is. They were tired of Obama’s wimpy attitude and endless excuses for inaction.

Graham: How in the hell am I supposed to defend this asshole in public? I mean, he is dragging us all down the rabbit hole. Why can’t he just think, for a moment, before he answers tricky questions? Just a moment. Is that too much asking?

Falafel: Not at all Senator.

Graham: We are going to lose the Senate and the White House in 2020 because of his ass. Just imagine the ads the Democrats are going to run on TV to mock this total loser. It is going to make us all look bad. Why can’t this dumb son of a bitch just shut the f*** up?

Falafel: Anytime you want to go on record Senator, I am ready.

Graham: How am I supposed to defend him in public? I know that my seat is not up for re-election in 2020, but Mitch McConnells’ is. Not only are we going to lose the Senate, but Mitch might actually lose his re-election in Kentucky. Polls show that he is vulnerable.

Falafel: Senator, I think you are drawing too dire of a picture. Unnecessarily.

Graham (Looking angry): Am I? This motherf**** in the White House is destroying the GOP. Single-handedly. Because of how stupid he is. Because he does not understand how damaging his words are to the brand.

Falafel (twirling his pen impatiently): Senator, whenever you are ready.

TRUMP IS A WINNER YOU’ALL

Falafel: Senator, what do you think of what President Trump response to the question Stephanopoulos of ABC asked? Has the President gone too far? Will he win in 2020?

Graham (all smiles): The Democrats want to make a mountain out of a molehill. The President will be re-elected in 2020. I can assure you of that …

Folks, Donald Trump ain’t getting any smarter between now and November 2020. Just enjoy this reality special because it won’t last.