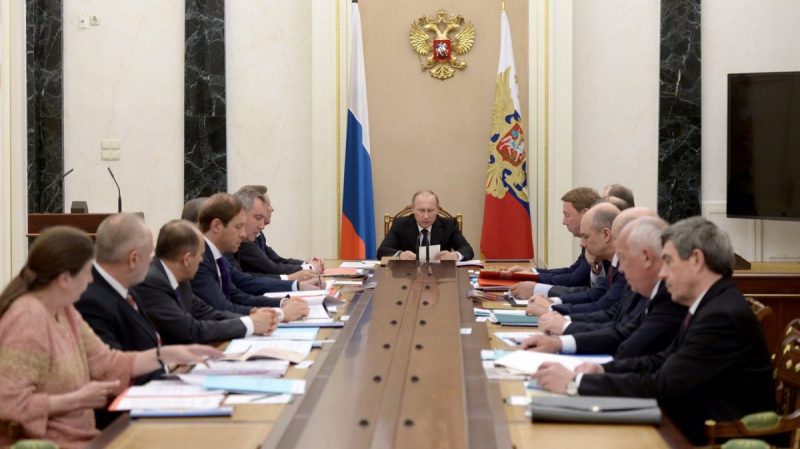 Within the realm of possibilities, Falafel thought to himself that if it is true that Donald Trump works for the Russians, then the President might exercise his executive powers to do things that are contrary to U.S. interests. Things like withdrawing from Syria and the latest government shut down he seems oblivious to its effects on the economy and the hard working Americans. An invitation to the Kremlin where Falafel witnesses Putin ordering Trump to shut down the U.S Government put all these doubts to rest.

With the exception of Muslim underage children, Falafel is the only Muslim allowed inside the Kremlin. Armed with his pen, he witnessed the miracle of Vladimir Putin toying with the U.S. courtesy of the wimp Barack Obama who opened for him the door to underestimate our resolve.

Sitting around a long conference table were all the aides Putin surrounds himself with at the Kremlin. Mostly ex-KGB spooks. Collectively, during military parades, they would be wearing more metal on their chests than the weight of an aircraft carrier. All rose when Putin entered the room.

Putin: Our idiot plant is making too many mistakes. The U.S. Intel community is chasing him down dark corridors the way a cat chases a mouse. As far as I am concerned, he is no longer useful. What should we do about him?

Andreij Belosov: I believe we can still milk him for some useful information. Too early to quit on him.

Larisa Brychyova: The thing with Trump is that you never know if he is winning or losing. The question is: Can he defeat the CIA, the NSA, and the FBI to come on top? Can he divert the attention of the American people away from those rascals watching him?

Vladislav Surkov: In my opinion, Trump is burned. Did you see how many news websites have cast a shadow on his loyalty to the Kremlin. That idiot is no longer useful to us.

Putin: If we burn him, then what? And if we keep him, then how do we extricate ourselves from all the suspicion?

Igor Levitin: Why don’t we gauge the situation on the ground? Send Deep Hole to seek more information to better decide.

Deep Hole is a red-haired Russian beauty who can out drink any Russian spy. She has been working Washington D.C. for a decade.

Vladimir Kozhin: With all the leaks in Washington, we already know what is going on. I say we burn the idiot and move on to greener pastures.

Yuri Ushakov: How do you recommend we burn him?

Andrei Fursenko: Congress must agree on a spending bill before their Christmas. Let us ask Trump to put a stumbling block to force a government shut down. The idiot ratings would plunge. Bye-Bye 2020.

Putin: Da. I like this idea. It will show we had nothing to do with his rise when he loses. Let us implement immediately. Where is the phone?

Someone brings a secure red phone to Putin. He dials the White House. It is 4 am in Washington.

Putin: Donny, my friend. How are you?

Trump: Who the hell is this? How dare you wake me up?

Putin: This is Vlad, you idiot.

Trump: Vladimir, so sorry for offending you. Please forgive me a thousand times.

Putin: I want you to block the spending bill until Congress pays to build the wall with Mexico. Do you hear me?

Trump: Yes, sir. Loud and clear. Block the spending bill for a wall.

Putin hangs up. The second most powerful man in the Kremlin now speaks.

Vaino Anton: I have an idea whom we can support for 2020. Her name is Tulsi Gabbard. She has already demonstrated a great affinity for Assad in spite of his criminal record. I believe she would be a good candidate. We can funnel her the money through Assad sympathizers in America.

Putin: Isn’t she a Democrat?

Vaino Anton: Yes. But who will suspect Russia is supporting a Democrat in 2020?

All agreed that Tulsi Gabbard is a good candidate. Her socialist agenda fits perfectly with their ultimate goals of breaking this country apart.

After Falafel witnesses Putin ordering Trump live, he felt dizzy. At that moment, he wished he was in the French Alps for a bottle of Evian.