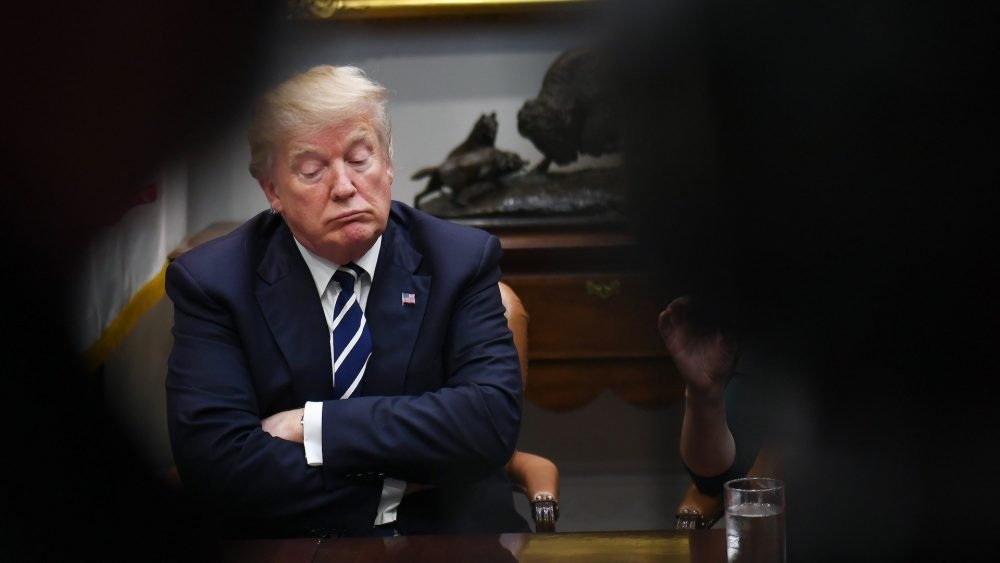 March 7, 2019 6:12 am 0
Small Time Trump Blinked Big Time
Even the Most Despicable Men Deserve Credit
No to Kurds But Yes to Syrian Oil Fields

Given the testimony of Michael Cohen, Trump’s fixer-lawyer, in front of the House Oversight Committee, Falafel saw an opportunity for another interview where Falafel exposes Trump real SAT scores.

Without further ado, Falafel embarked on his journey to meet President Trump in the Oval Office. As usual, Trump tweeted to his followers that he allowed a Muslim at the White House to validate his rights to hate Muslims for which he instinctively ignores, thus making him a non-racist Muslim hatemonger.

Falafel: Thank you Mr. President for this impromptu interview.

Trump: You know that I hate Muslims Falafel, so why do you keep interviewing me?

Trump: What do you have for me today?

Falafel: As you know Mr. President, Michael Cohen testified in Congress that you asked him to threaten with legal action any institution that releases your grades or transcripts. The threatening letters began arriving shortly after you challenged your predecessor, President Obama, to show his school records and grades. I would like to ask, why did you suppress the release of your SAT scores and all transcripts all the way through college?

Trump: I was hoping for someone to ask me that question. The answer is very simple.

I AM A GENIUS

Falafel: But why ten suppress their release Mr. President? If it shows you are a genius it would silence your critics.

Trump: Because exposing my SAT scores and grades would have bothered lots of people and would have made my ardent followers look stupid. This is why. I don’t want people to feel inferior to me.

Falafel: That’s very considerate of you to think of someone other than yourself. Would it be possible for me to see them? I give you my word, I will not expose them if you so desire.

Trump: I am not sure that is possible. I mean I asked everyone to bury them or burn them.

Falafel: But these are historic documents Mr. President. Should not our National Archives possess them and one day permit the public to see your genius?

Trump: I thought about this for a long time. I would like to spare, even the next generations of Americans, to feel inferior to me. It is very presidential of me, don’t you think?

Falafel: I don’t know about that Mr. President. The public has the right to know. Don’t you have any copies or spare transcripts?

Trump: Funny you mentioned that. I was rummaging through some business papers the other night, and I did come across a copy of my SAT Scores.

Falafel: Really? Can I see them please?

Trump: OK. On one condition, you let the world know.

Falafel: But Mr. President, you just told me you don’t want your followers to feel stupid.

Trump: I changed my mind, OK? Do we have a deal?

Falafel: We have a deal Mr. President.

Trump: Rhona bring me the oil file I was looking at yesterday.

Trump: Just do it.

Wow, Falafel said to himself this President is the real McCoy. The man was not lying.

Falafel: This College Board letter Mr. President is testimony to your genius. By this afternoon the whole world is going to know that the 45th President of the United States is a true genius.

Trump: See? I told you I was a genius. Have you considered what my middle name is? It’s J. It stands for jenius.

While Falafel was attempting to open the envelope to insert the College Board SAT Scores back he noticed another paper inside. He pulls it out.

The paper was addressed to “Mr.” Donald Trump from the Minister of Oil in Nigeria imprinted with no less than five red and blue ink stamps, and about seven ineligible signatures. The letter spoke of “Enclosed SAT Scores” document.

Falafel looks at Trump, all perplexed.

Trump: This is nothing. I was doing business in Nigeria and they asked me for copies of my SAT Scores for their files.