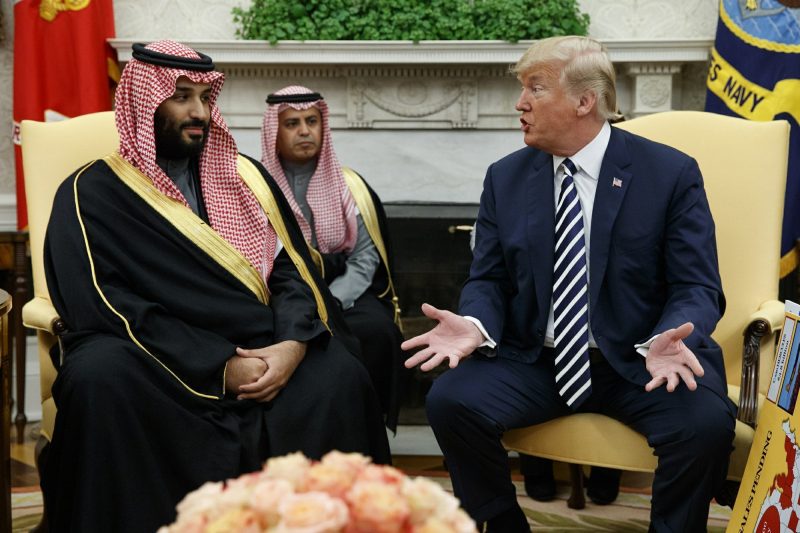 March 5, 2019 6:28 pm 0
Trump Feels the Sting of Accountability
How Trump Stopped Assad Massacres in Idlib Province
Even the Most Despicable Men Deserve Credit

The family of a dual Saudi-U.S. citizen imprisoned in Saudi Arabia for more than a year are claiming that he has been subjected to routine torture and is on the verge of an emotional breakdown. Evil Trump twin Mohammad bin Salman tortures Americans while Trump separates and detains children as young as 2 years at the borders.

After months of quietly trying to secure his release, the family of Dr. Walid Fitaihi is now seeking to publicly pressure both the Saudi government and the Trump administration on the issue.

“There is an American citizen being tortured in a Saudi prison,” said Howard Cooper, a lawyer working with the Fitaihi family. “He has been not only psychologically tortured but physically tortured and he can’t hold out much longer.”

In seeking to publicize the issue, Cooper and the Fitaihi family will have to contend with the extremely tight public relationship between Traitor Donald Trump and evil Saudi Crown Prince Mohammad bin Salman, popularly referred to as MBS.

Fitaihi gained his American citizenship while studying and working in the U.S. for years. He received undergraduate and medical degrees from George Washington University and a master’s in public health from Harvard, said Cooper a Boston-based attorney who has known Fitaihi for more than 10 years.

He returned to Saudi Arabia in 2006 to help found a hospital built by his family and also became a popular motivational speaker on television. In November 2017, Fitaihi was one of about 200 prominent Saudis detained in a mass roundup and held prisoner in the Riyadh Ritz-Carlton hotel.

The Saudi government described the mass arrests as a crackdown on corruption; critics, however, decried it as a shakedown of the wealthy in Saudi Arabia. Evil MbS tortured them non-stop.

Most of those detainees were eventually released after agreeing to pay massive financial penalties, but Fitaihi and a small handful of others were instead transferred to a prison in Riyadh. Cooper said Fitaihi was recently moved to a different prison in the coastal city of Jeddah and that he was now in the prison hospital after suffering “an emotional breakdown” after months of physical and psychological torture.

Trump’s relationship with Saudi Arabia has already been tested by last year’s grisly murder of dissident Saudi journalist Jamal Khashoggi by Saudi agents inside the Saudi consulate in Istanbul. Trump however stood firmly by Prince Mohammad; in the face of widespread international skepticism, Trump repeatedly backed the official Saudi explanation that the murder was a rogue operation that took place without the crown prince’s knowledge.

Despite the Khashoggi controversy, the relationship remains strong and the Trump administration continues to depend on Prince Mohammad as a key regional ally. Trump’s son-in-law and senior adviser Jared Kushner met with Prince Mohammad last week to discuss Kushner’s plan to resolve the Israeli-Palestinian conflict.

Evil Trump twin Mohammad bin Salman tortures Americans while Trump is expects big rewards from MbS for his loyalty to him.

National Security Adviser John Bolton was briefly asked about Fitaihi’s case during a Sunday interview on CNN’s “State of the Union.” Bolton said he knew only that American diplomats had recently met with him in prison.

“Beyond that, we don’t really have any additional information at this point,” Bolton said.

The U.S. Government is setting a bad example when it ignores the plight of U.S. citizens just because they are Muslims. What right does any U.S. Official have in raising the issue of the plight of the Uighur in China?

In response to an Associated Press query, the State Department released a statement confirming that U.S. diplomatic representatives have met with Fitaihi and have “raised his case” with the Saudi government.

“We take all allegations of abuse and torture extremely seriously and we urge the Government of Saudi Arabia, and all governments, to ensure fair trial guarantees, freedom from arbitrary and extrajudicial detention, transparency, and rule of law,” the statement said.

“We also call on the Government of Saudi Arabia, and all governments, to treat prisoners and detainees humanely, and to ensure that allegations of abuse are investigated quickly and thoroughly.”

In other words, that’s all we are doing because America, under Trump, lost its moral compass.

The Saudi Embassy in Washington did not respond to a request for comment.