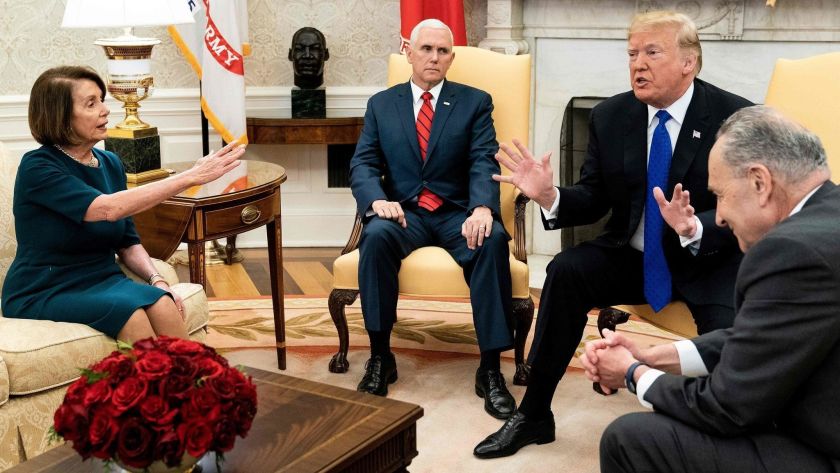 Trump Feels the Sting of Accountability

The first person in the long life of President Donald Trump to deliver a real dose of reality to a man who never concerned himself with laws or decorum is Nancy Pelosi. With his impeachment, finally Trump feels the sting of accountability.

Donald Trump had it easy all his life. He was a spoiled brat and remains one to this day. When other high school kids struggled to enter the prestigious Wharton Business School at the University of Pennsylvania, Trump sailed through easily because of his father’s money. The man cannot, to this day, even utter a properly structured English sentence. Yet, he is a graduate of Wharton Business School. In our opinion, this is the first sign of how easy and unaccountable the life of Donald Trump has been.

Does Trump see in Pelosi’s aggression the motherly structure he lacked and for which he finds himself yearning to obey its call?

Then Nancy Pelosi wielded her powers. Mainly because of Trump’s lack of accountability even as a sitting President. Whether the President knew he was committing a crime by pressuring a foreign leader to investigate his opponent while withholding foreign aid remains debatable. To those who believe in Trump’s lack of common sense (i.e. dumb), or those who believe in his lack of accountability, the result is all the same. This President believes he is above the law.

Just analyze this Tweet to reveal how his mind works.

Such an important day at the United Nations, so much work and so much success, and the Democrats purposely had to ruin and demean it with more breaking news Witch Hunt garbage. So bad for our Country!

What is bad for Donald Trump is bad for the country. Ruin his day. So much success.

The man can never be wrong because he has never been accountable in his life to anyone or any laws. At the age of 73, he is finally feeling the sting of accountability and he has nothing but scorn for it as he resists with vitriolic rhetoric.

Surprisingly though, he has yet to attack the person of Nancy Pelosi like he usually attacks others. Does he see in her aggression the motherly structure he lacked and for which he finds himself yearning to obey its call? We need Sigmund Freud for this one.

SWINDLER IN THE WHITE HOUSE

One of the most logical reasons provided for the landslide win of the Democrats in mid-term elections was to hold Trump accountable as the public began witnessing Trump’s flaunting of the laws. It was more a Tsunami than a landslide.

Even Speaker Ryan, at the time leading the House, warned of what we are witnessing today. He said:

House Speaker Paul Ryan warned that Democratic gains in November’s congressional elections could make it impossible to get anything accomplished and expose President Donald Trump’s administration to more aggressive oversight.

Taking the pulse of the public revealed just how much the American voters felt about Trump’s lack of accountability and lack of good judgment. They brought back the Democrats in order to keep their eye on him.

The impeachment is making the President quite angry. Not only because it is a stain on his newly-minted political career, but also because impeachment is our system of checks and balances working its magic. One Trump hates with passion because there were never any checks or balances in his own life and upbringing.

Trump Feels the Sting of Accountability