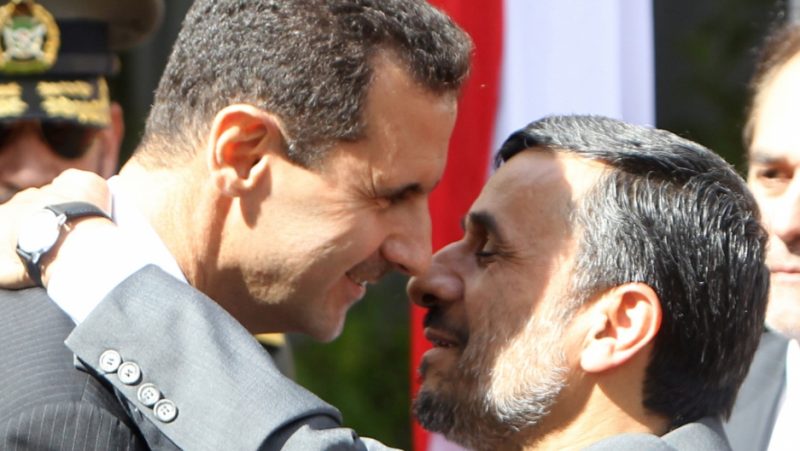 Every time we read an article lamenting Arab dictatorships when violent rulers, like Assad, directly or indirectly, foster radicalism and fundamentalist ideologies, we get this sense that all the books, all the experiences, all the learning, and all the investments made to help Arab Muslims reach for the 21st century have just been thrown out the window. The west backing Arab dictatorships is a knee jerk reaction that helps the rise of the Islamists.

No one should underestimate the danger of violent Islamism born as a result of dictatorial Arab regimes. Look at the timelines. Ever since violent Arab dictators have ascended to power, extreme and violent Islamism began to rise in the Middle East. This is certainly not a coincidence. Violence begets violence.

Extreme Islamism, since, has turned into the common denominator between many different political ideologies that could never agree on anything else. It’s an unstoppable danger; yet, the west seems to ignore the root causes in favor of responding to their disastrous effect. America would rather support Arab violent dictators indirectly fostering violent Islamism and then commit billions to fight Islamism than institute a zero tolerance policy towards the extreme violence of Arab dictators thus curbing the rise of extreme Islamism. Go figure how our policymakers think. Maybe the potential billions to be earmarked drive the policies.

The problem in that America’s knee jerk reaction of installing Arab dictators maintains blameless all those who have opened the gates of hell to Islamist organizations. Whispers behind closed doors certifying Islamist qualifications by Obama officials, for one excuse or another, should not go by the wayside by solely concentrating on lamenting Arab dictatorships. The Middle East should not be viewed from the prism of wrestling a wolf to the ground to replace it with a hyena.

The rise of al-Qaeda in North Africa and the Levant is directly connected to an Arab Spring the Obama Administration wanted to hand over to those many who believed represented their people. The ones that prayed, looked like Arabs, and acted like Arabs were all legitimate heirs to the region. Obama may have discovered they were all degenerate sociopaths interested in power and power only, which in the case of Syria, led Secretary Hillary Clinton, sometime ago, to drop support for the Syrian National Council formed in Turkey under the watchful eyes of PM Erdogan in favor of a larger gathering the MB still controls disproportionately.

But the Obama Syria Policy is just a continuation of one that started in 2006. Back then, a World Bank Executive beholden to Saudi Arabia, named Shaha Riza, stuck her nose in the Bush Administration charted course to promote stability in Syria. Unfortunately, the US State Department, at the time under the influence of Condoleezza Rice, obliged her. That’s how the process of helping Islamists really began when the NEA at State funded Barada-TV with a $6m grant with Shaha Riza’s deliberate assistance. Barada TV operated under the guidance of, supposedly, ex-Muslim Brotherhood members.

If there are oxymoronic words you can rely upon in the Middle East, it’s the words Ex-MB. A real Ex-MB is as rare as an Asian Crested Ibis.

In short, when the U.S. intelligence community was backing Arab dictators, the diplomatic community began toying with the idea of backing, with Riza’s interference, Islamists at home. Go figure.

In our humble opinion, the US State Department should have its doors wide open to the Arab League Members when discussing THEIR problems, but should be closed shut if to attempt to influence US policy in the ME. All of the problems we are facing today emanate from listening too often to U.S. officials influenced by countries like Saudi Arabia, UAE, and Qatar. More recently, Qatar has been one to push for support of the MB in Washington, and if AQ is back trotting their terror, Qatar is as much to blame as the Obama policies in the region are.

Today, AQ in the Middle East views that support and the rise of the MB in Egypt, engineered by the White House, as support for Islamization of the region. The combination of American retreat and support of the Muslim Brotherhood is so lethal, the Obama officials never truly grasped how wrong their policies were. Their denial is compounding the matter because we have yet to witness a more sensible policy take shape.

Those actions emboldened AQ. While Obama spun his pictures of his leadership behind the operation that killed Osama Bin Laden, then closed the file by telling the world War on Terror is over, AQ flexed its muscles in Benghazi as a reminder to America and Obama in particular. More recently, it flexed them again in Algeria because France, with its deep history in the region, knows it can only reverse Obama’s policies if it takes the lead with boots on the ground. It’s one western country fighting the foolish policies of another.

DO NOT FORGET HONEST ARAB LEADERS

One cannot support Islamization of a nation and not expect AQ to rear its ugly head. It’s an infantile policy that truly shows how Western policy makers sometimes are clueless about the region. Nonetheless, Islamization should not be the driver behind lamenting corrupt Arab rulers who drove the region into the laps of AQ in the first place.

What is the solution you ask? Here is a suggestion, which does not answer the immediate problems the region is facing today but we believe it is the right one to start setting in motion.

Every time we watched a video of a western charismatic leader speak, we wondered: How many Arabs and Muslims exist in the Arab world today with the power to lead? We are not talking about policies, but rather about their communicative skills and the charisma to persuade millions. The reason they don’t exist is because Arab rulers root them out and kill them immediately. Competition is not exactly Kosher in their field of work. Just stop lamenting Arab dictatorships.

So now imagine for a moment the US grooming such future leaders the way the CIA grooms young Russians to spy for the US. But instead of becoming spies or violent Arab dictators ruling with a stick of dynamite in one hand and a whip in the other, they become true patriotic leaders with a full understanding of how important western values are to building a nation. With their power and charisma, they might lead the nation to an active democracy instead of letting their people follow old-bearded men blindly with foolish promises no reasonable mind would embrace. He or she will pay attention to civil organizations, education, and the rule of law, instead of pilfering funds, killing their people, and abusing their rights.

At the right time, the people ask these groomed leaders to yield the country back to them. Once the west is secure in the knowledge the country has turned a corner by demonstrating that the rule of law is supreme and that Islam is a true religion, not a political party, then retreat becomes a choice instead of a necessity.

Lamenting Arab dictatorships with blood stains on their hands and coffers of Ali Baba hidden in their caves while their people suffer from poverty and exclusion is not the answer to extreme Islam. The problem has always been the laziness of the west to really develop long-term plans with real purpose. Instead, the west backs corrupt Arab ruling families or Islamist organizations so dangerous to the region.

Bill Gates worked for his wealth, so why for heaven’s sake do we accept this notion of hard work and success for ourselves, yet we let camel herders play with hundreds of billions of Dollars from money they stole from their own people and then expect the region to simply be all dandy? Accept somehow that Arab rulers are not counter-intuitive to our own interests and those of their own people?

Lamenting Arab dictatorships instead of working on intelligent solutions is in our opinion the ultimate act of western laziness. It’s as bad as romanticizing violent Arab dictators.