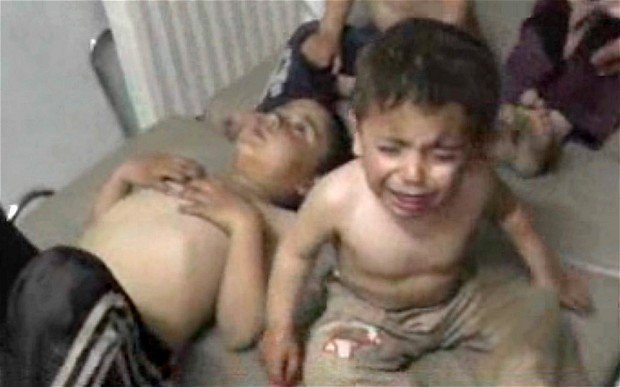 April 17, 2015 10:35 am 0
Assad Forces Targeting and Killing Christians
Jihadism on Steroids
Will Alawite Mothers Save Syria?

Dehumanization is a process of cleansing a soul of any guilt. In the words of Michelle Maiese at the Conflict Research Consortium:

Dehumanization is the psychological process of demonizing the enemy, making them seem less than human and hence not worthy of humane treatment. This can lead to increased violence, human rights violations, war crimes, and genocide.

Maiese cites the two examples of the Nazis against the Jews during WWII and the Hutus against the Tutsis in the Rwandan Genocide. Had her article been written after 2011, Maiese would have also added the Assad regime against the Sunnis of Syria revolting against his tyranny.

But how do people like Barack Obama get dehumanized? The Syrian people are not his enemy unless he perceived them so the moment Senators John McCain and Lindsay Graham came to their rescue politically, nor do I think he sees them as ‘less human’. There has to be another consciousness factor at play here that dehumanizes leaders to act.

If the Chlorine Gas Assad is using without any impediment against the civilians of Aleppo has moved UN Security Council members to tears, what do you think the dehumanized Barack Obama would feel if he watched the video of small children suffocating to death live on camera?

What do you think would-be-jihadists feel? What do you think they would do? As long as the world permits Assad to gas his own people, there is no end to the flood of jihadists. No end to ISIS, al-Qaeda, Jabhat al-Nusra, and a myriad of other small factions all moved to volunteers.

Many have tried to analyze the reasons behind the flow of jihadists to Syria and Iraq. Some say it is the attraction of a single Islamic State, others say it is because Europe has been unable to absorb and integrate its Muslim population, and then others attribute the surge to some puppy love. Very few see that if the UN moved to tears, jihadists moved to volunteers.

We can all keep our head in the sand and pretend Assad, and his masters in Tehran, are not really the cause behind all terror in the region. We can all ask the ‘who will replace him’ question and we can all be fearful of the consequences of getting it wrong. In the meantime, as long as Obama remains an ignorant chief and as long as Assad continues to gas his own people knowing well it is the only way to push the West to his side, jihadists will continue to grow, continue to terrorize, and continue to get more sophisticated.

It is really about Assad or the jihadists. Bombing the jihadists has not worked, it is time to bomb Assad to stop his Chlorine Gas attacks.

World Leaders Legacies Written With Their Silence Over the Assad Crimes
Too Little, Too Late, Too Insulting
An Intelligent Citizen’s Guide to Iran Policy
Assad Genocide 429 Slippery Barack Obama 976