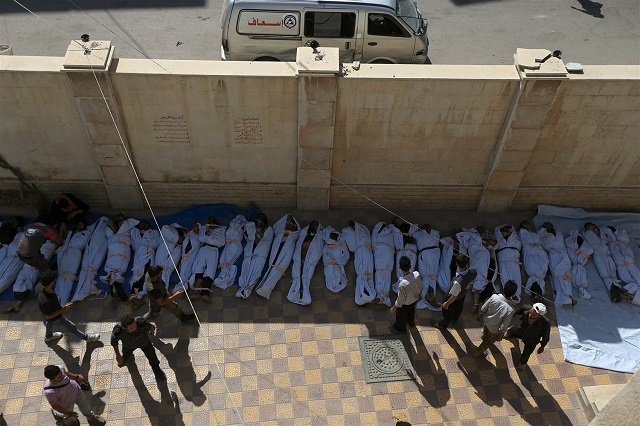 The Syrian military bombarded, for a second day, an area northeast of Damascus on Monday, keeping up its attack on a rebel-held district where around 100 civilians were killed on Sunday in an air strike on a market.

As if 100 civilians dead is not enough, Assad bombards civilians in Douma, again. After full condemnation by the U.N.

Anyone else thinks this man should rule Syria? Or not be hauled to The Hague as soon as possible?

Sunday’s air strike on Douma, 10 miles (15 km) northeast of Damascus, was one of the bloodiest attacks of its type in the four-year-long war that has killed an estimated quarter of a million people and driven 10 million from their homes.

The U.N. envoy for Syria condemned the air strike, while the United States said it showed that Assad had lost legitimacy and called for a “genuine political transition”. There was no mention by Kirby on the effect Obama’s Iran deal has on Assad massacring civilians.

Syria’s political opposition said the protracted conflict could not be resolved if such attacks went unpunished.

“Any talk of political and peaceful solutions in the shadow of massacres and excusing the criminal from punishment will have no meaning in realizing stability in Syria,”

Sixty bodies were buried on Sunday night in two mass graves, said a spokesman for the Syrian Civil Defense force in Douma, a rescue service operating in rebel-held areas. Another 35 were buried on Monday, and the death toll was over 100, he said.

“It was really difficult to identify the bodies of the martyrs. Some of them were burned to the bone, so we couldn’t add them to the documented list,” said the 28-year-old spokesman, who declined to give his real name for security reasons. His house was destroyed in the bombing, he added.

The opposition National Coalition for Syrian Revolutionary and Opposition Forces said the attack aimed to inflict as many civilian casualties as possible. The dead included children.

Activists on the ground reported that at least 100 people were killed. After rescue workers arrived following an initial attack, the warplanes bombed the area again.

The Divisions Between the FSA and the SNC Widen
AP Stuck at 5,400
Obama is mimicking the savagery of Assad
Assad Genocide 429