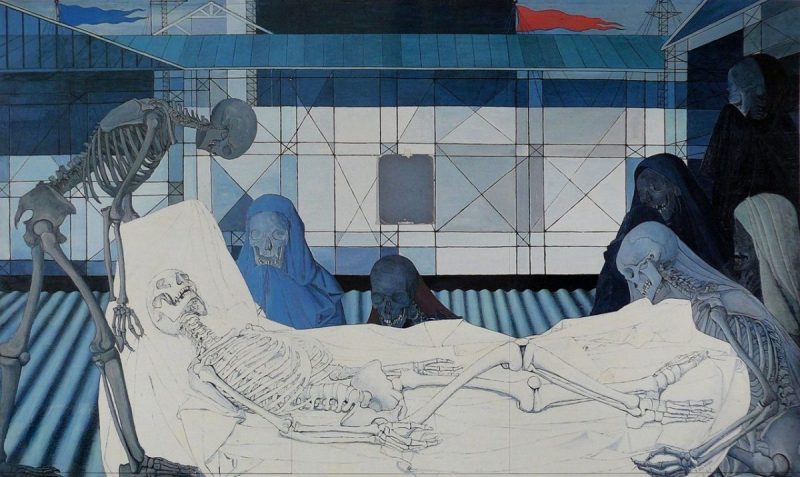 A triple car bombing targeting Assad security checkpoints in Idlib took the lives of 22 people. Most likely, anti-Assad extremists planted the bombs in response to a large car bomb that exploded at the University of Aleppo, which caused the death of 87 students during exam periods (Many bodies have not been recovered, so the death toll will rise). The Assad regime targeted the young student community in Aleppo thus sending a signal that if Aleppo falls, it will suffer from Assad’s terror for a long time. This is what a failed state macabre looks like.

The regime’s capability in manufacturing car bombs has no equals in the region. In fact, the Syrian Internal Intelligence Services (Mukhabarat al-Amn al-Dakhli) has built several clandestine plants, with Russia’s duplicity. Defectors from the Syrian Army revealed their locations back in 2011. It is safe to assume that those plants have been re-located and back online fully by now. The Assad expertise in car bombs caused the death of many Americans in Iraq.

With the Aleppo bombing, Assad has now deployed almost all his weapons and tools of terror against the civilian population to include SCUD Russian missiles, Cluster bombs, and car bombs so powerful they are able to take down a block of buildings. Assad has also used rape of women and torturing children as side tools of his craftsmanship.

In addition to the Assad regime, Hezbollah, Iran’s premier client, has also used car bombs against US interests. Hezbollah also used car bombs to kill Lebanese politicians  deemed as a threat. Hezbollah’s terror began in the mid eighties and culminated in the death of Rafik Hariri in 2005. A a crime that Hezbollah and Assad have yet to pay for. Their latest victim was the head of the Lebanese Information Branch in the Internal Security Services Gen. Wissam al-Hassan. The US interests Hezbollah targeted with their car bombs are the US Embassy in Lebanon and the US Marine Barracks both in 1983.

But the daddy of them all is Iran, which mastered the manufacture of the IED roadside bombs; these devices are so powerful they spawned a whole new armored car industry for the US Army.

Syria IS Changing the Region

While all the terror repeats itself in Syria, our policy makers fail to grasp the impact the failed state macabre posed by Syria. They fail to grasp the impact this will have on the whole Levant region, and on terror in general. We have the right to moan and groan about Iraq even though Syria and Iran caused all the terror. At least President Bush left behind an orderly country, not a failed one. Obama’s laissez-faire policies do not exactly tell us what our costs might be. Additionally, no one can blame him for anything today except ignoring death in Syria; however, if President Obama is wrong on Syria, which we believe he is, every American would wish another George Bush-like President is voted into office.

Because of Obama’s policies, Jordan, a peaceful country, is on the brink of collapse. Irreparably, this will cause dire consequences. Furthermore, Lebanon is simmering beneath with sectarian violence that has already manifested its ugly face on several occasions. This analysis excludes the blood Islamic extremists smell when it comes to Israel, something President Obama seems to be totally oblivious to. Who said appeasing men of violence could have little consequences?

While this failed state macabre scenario slowly sends us running in every direction, Putin tells the world “Nyet” to stopping it. Meanwhile, Obama opens his arms for a dialogue without a sense of history of how many wills this region bent before him.

There is no escaping realities. Every bomb and every death in Syria makes it more difficult later to solve the problems they cause. This tunnel vision for a dialogue-at-any-cost with enemies who are intent on defeating America is in and by itself defeating America. Russia and Iran can simply continue on that path and wait for the region to crumble; thus, serving exactly the policy of destabilization Russia has wanted all along with her support for Assad. Except that from today’s ruins Islamist extremists are rising and not Communist or Socialist zealots.

The US response, so far, has been minimal. The two most important actions by Obama have been mostly defensive in nature. He ordered batteries of Patriot Missiles for Turkey and he vaguely drew a Red Line warning on the use of chemical weapons; more to contain the matter than to save Syrian lives.

What many analysts and diplomats do not realize are the consequences of Syria as a base to recruit extremists for many generations to come. President Obama believes he can complete his legacy if he can strike a deal with Iran his predecessors in Presidents Ronald Reagan, George Bush Sr., Bill Clinton, and George Bush Jr. could not accomplish. Meanwhile, it seems that only Iran knows its own nuclear unwavering intentions. Everyone else, including Obama, believe they can “persuade” Iran not to go down that path.

For the US, the costs are piling-up. Our President seems not to be able to compute a simple costs/benefits analysis. The USA must revisit a Syrian policy ticking more like a bomb than chiming the angels to gather.