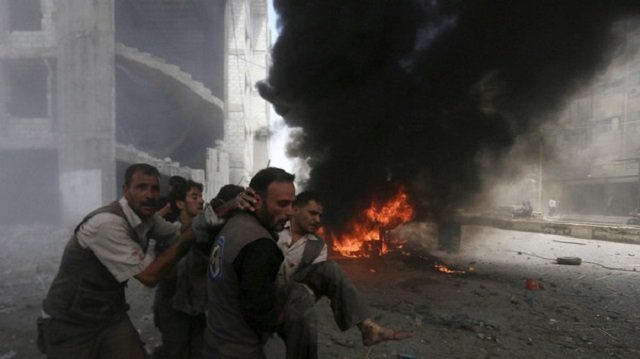 August 17, 2015 4:45 pm 0
The “Fill the Blanks” President
The Mother of All Stalemates in Syrian Civil War
What Hafez May Have Told Baschar on His Death Bed

The U.N.’s humanitarian chief fiercely condemned attacks against civilians in Syria at a press conference in Damascus on Monday, a day after one of the bloodiest government raids in the four-year war.

“I am horrified by the total disrespect for civilian life in this conflict,” Stephen O’Brien said in a statement. The UN horrified by Assad barbarism is not news.

He said he was “particularly appalled” by reports of civilian deaths in Sunday’s air strikes on the rebel-held town of Douma, and said attacks on civilians “must stop”.

At least 96 people were killed on Sunday in 10 government raids on Douma, according to the Syrian Observatory for Human Rights.

O’Brien’s press conference concluded his three-day visit to Damascus, his first to the war-torn country since his appointment in May.

In a statement released by the U.N.’s Office for the Coordination of Humanitarian Affairs, O’Brien appealed “to each and every party to this protracted conflict to protect civilians and respect international humanitarian law.”

The statement said O’Brien had discussed strengthening the U.N.’s humanitarian operations with Syrian officials, but remained “concerned” about 4.6 million Syrians stuck in hard-to-reach and besieged zones.

The U.S. also waded in on Monday, condemning the Syrian government air strikes and reiterating that President Bashar al-Assad must go.

This is the same State Department that is releasing $150 billion to Iran soon, some of the money which will find its way to Assad to kill more civilians.