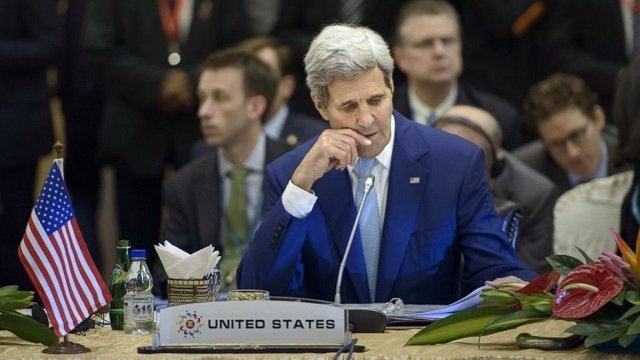 August 6, 2015 8:34 am 0
King Salman Rightfully Blames Psychopath Assad for Rise of Islamic State
With Assad Army Collapsing, Government Urges People to Enlist
Obama has presided over a moral and strategic disaster in Syria

TFS Note: Is Kerry, with help from the Russians, in agreement over a process to launder the crimes Assad committed? We believe it is a “fall guy” process to keep Assad in place that might be blamed on ISIS.

U.S. Secretary of State John Kerry says he hopes an agreement reached with Russia to investigate chemical weapons attacks in Syria will hold the perpetrators accountable.

Speaking Thursday in Malaysia, Kerry said he and Russian Foreign Minister Sergey Lavrov had agreed Wednesday to language of a new U.N. Security Council resolution that would create an investigative mechanism to determine who is responsible for chemical attacks. The current process does not allow investigators to make a finding of accountability.

Do you see this train wreck coming? Any bets ISIS will be blamed just to launder Assad crimes with the full participation of John Kerry? Is Kerry laundering Assad crimes to please Lavrov? If Putin had to dream about the ideal Secretary of State he could manipulate, in his dream would appear John Kerry.

Kerry said the resolution “will create a process of accountability which has been missing.”. This comes after all Western intelligence services and the U.N. confirmed Assad was behind it. The chain of command is obvious because we know how orders are processed, who process them, and the location provides us who was in command at the time.

If Assad does not cooperate, how exactly will this process work? This is indicative of some malice at work here.

“What we are trying to do is to get beyond the mere finding of the fact that it may have been used and actually find out who used it and designate accountability for its use,” he added

Any bets, because Russia has agreed to the process, that it is a foregone conclusion Assad is innocent? Why is Kerry laundering Assad crimes? Has Assad promised partition of Syria in return?

Why would Russia agree to a process that would indict their protege if it was not conspiratorial in nature?

While Russia and the United States have failed to agree on a way to end the Syrian conflict, they did agree on eliminating its declared chemical weapons stockpile. The U.S. has been pressing the Security Council to ensure accountability for an increasing number of alleged chlorine attacks.

Following a chemical weapon attack on a Damascus suburb that killed hundreds of civilians on Aug. 21, 2013 a U.S.-Russian agreement led to a Security Council resolution the following month ordering the destruction of Syria’s chemical weapons, precursors, and the equipment to produce the deadly agents.

The Syrian government’s support for the resolution and decision to join the Organization for the Prohibition of Chemical Weapons, the global chemical weapons watchdog, warded off possible U.S. military strikes in the aftermath of the attack, which Damascus denied carrying out.

Syria’s declared stockpile of 1,300 metric tons of chemicals has been destroyed, but the OPCW is still investigating outstanding questions about undeclared chemical weapons.

Chlorine is not a banned agent used in chemical weapons, like sarin or ricin. But it is toxic and its use in attacks in Syria started being reported last year.

In March, the Security Council approved a U.S.-drafted resolution that condemns the use of toxic chemicals such as chlorine in Syria, and threatens further measures including sanctions in the case of violations.