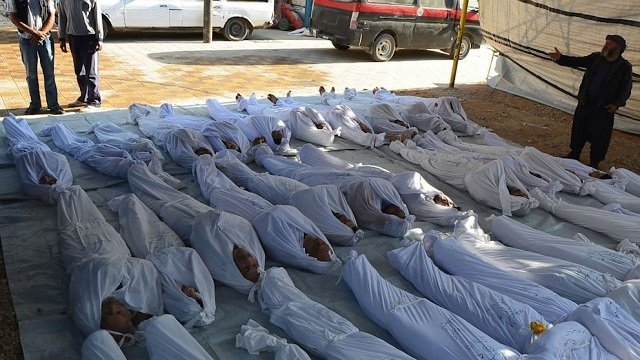 Syria’s Plan to Give Up its Chemical Weapons Could Make Things Worse, Not Better

Few people depress me these days like Michael Doran. A Middle East expert at the Brookings Institution, Doran has been a leading advocate among thoughtful foreign policy analysts for a more aggressive U.S. intervention to end the conflict in Syria. Agree or disagree with that policy (I’m not sure I do, personally), it’s left him especially skeptical of the Obama administration’s push for limited strikes against Syria for its alleged use of chemical weapons.

When Russia seized on U.S. Secretary of State John Kerry’s offhand suggestion that Syria could avoid U.S. strikes by giving up its chemical weapons, I reacted, like many, with highly cautious optimism that this could offer a small but significant reprieve for Syrians and success for Obama. But Doran had a very different take: that this is a dishonest ploy by Russia and Syria that boxes in the Unites States and, more importantly, makes any relief for Syria’s civil war far less likely.

Doran made his case against the plan on Twitter, in the form of eight “truths about our new policy of working with Putin” to secure Syrian chemical weapons. Even if you think that Obama should pursue Russia’s proposal, Doran raises some important concerns. Key quote: “Obama now needs Assad and Putin. He is their partner in this sham process.” Here are his eight hard truths, followed by a short interview I conducted with Doran via e-mail to elaborate on some of his points.

#1 | Assad will never under any condition truly relinquish his CW. He is a proven liar on issues such as this.

#2 | US cannot coerce Assad, b/c for all intents & purposes BHO lost the vote in Congress, even though it never took place.

#3 | Putin, recognizing that Obama had boxed himself in, provided him with an excuse to leave the battlefield w/honor.

#4| Obama can claim that he “coerced” Assad to give up CW & that he revitalized US deterrent w/out firing a shot.

#5| But Obama now NEEDS Assad & Putin. He is their partner in this sham process.

#6| When Assad cheats, Obama will make excuses. Otherwise he’d have to do something about it ”“ which he can’t do, b/c he lost the vote.

#7| A year ago, we were calling on Assad to step down, but now he is our partner, together w/Putin, in a Potemkin disarmament effort.

#8| Remember the fiasco, in the 1990s, of using UN to search for Iraq WMD while Russia obstructed. We willingly jumped into that again!

WorldViews: Is Obama completely boxed in by Congress and Putin? Does he have any real option now other than what Lavrov proposed?

Michael Doran: Having dealt himself the hand of working with Russia and Syria, Obama must play it out. But he could play it aggressively, by which I mean making very serious demands of compliance up front, as Kerry did in demanding that Assad hand over his chemical weapons in one week. Or, for example, Obama could demand that Assad sign the international convention banning chemical weapons tomorrow. And that Assad give a full listing of all chemical weapons sites within days and allow UN monitors to immediately install monitoring devices there. This would be a way of putting the Russians and the Syrians to the test quickly, and perhaps of dispensing with this charade more quickly.

But in order to take this approach, Obama would have to be willing to answer the next question, which is, “Then what?” His Syria policy has been incoherent and he would have to do the hard work of developing one that made sense, which to my mind is the kind of thing that Senators John McCain and Lindsey Graham are advocating, gathering an international coalition to build up the Free Syrian Army as an alternative to both al-Qaeda and the Assad regime. This would be a major undertaking. It need not require American boots on the ground, but it would take American leadership, time and effort. Obama’s preference from the outset has appeared to be avoiding Syria entirely.

WV: Kerry’s comments obviously opened the door for all of this. Do you think the administration is secretly grateful for the exit he gave them?

MD: Yes. The president has never wanted to take any action in Syria. His initial “red line” comment, made in August 2012, was an off-the-cuff remark, not a statement of considered policy. The first time he came under pressure to honor it, last April, the administration came out and said that it was arming the opposition. The arms never arrived. This time around he has displayed a similar reluctance. So President Obama is likely grateful to have found a diplomatic path, even if it is a sham. But he is not alone. Many in Congress are relieved. The vote, especially in the House, was going to be a catastrophic failure for the president, and many members did not want to go through with it. They are happy to avoid the whole thing.

WV: Tell me more about the lessons of the UN in Iraq in the 1990s, keeping in mind that when most people hear the words “Iraq” and “WMDs” they think of a 2002-2003 series of events that went very differently.

MD: Bear in mind that we had just dealt Iraqi leader Saddam Hussein a catastrophic military defeat in Kuwait. We had no-fly zones in the north and the south of the country. We were, that is to say, putting him under a lot of direct military pressure, the kind of leverage that is totally absent from our diplomacy with Syria today. Also bear in mind that Saddam agreed to give up his weapons of mass destruction as a result of his defeat.

Back in the 1990s, we had an agreement, we had leverage, and we had a UN team that went around Iraq in search of weapons of mass destruction. But still, Saddam impeded the monitors. He lied and cheated. He played a shell game, moving stuff out the back door of warehouses while the inspectors were pounding on the front door to come in. All the while, in the United Nations, the Russians played lawyer for the defendant.

You only need to look at the way the Russians have dealt with the chemical weapons issue in Syria to get a taste of what awaits. The intel services of Britain, France, Israel and the United States, the best intel services in the world, assess that Assad likely used chemical weapons against the rebels. Russia says no. It says the evidence is lacking. It demands more proof. What await us right now is a lengthy three-way negotiation between Washington, Moscow and Damascus over the terms of the inspections. That process alone will likely last weeks, perhaps longer. It wouldn’t surprise me if, weeks from now, President Obama were attending the United Nations General Assembly while still holding meetings about a UN resolution to compel Assad to give up his chemical weapons.

I guarantee you that as we speak, Assad’s chemical weapons team is frantically pouring bottles of Chanel No 5, which Hezbollah stole from Lebanon, into missile shells that it will deliver to the UN in an elaborate demonstration of compliance with the agreement. We will take one whiff, call it perfume, and cry foul. The Russians will say that the evidence is not conclusive, a UN team should run tests. It will have loyal Russian scientists on the testing team, because it will have had a hand in writing the resolution that set up the inspections. The Russian scientists will say that it is not perfume but, rather, deracinated ricin, which has the qualities of Chanel No 5. This game will eat up months and months and, meanwhile, Assad will have a free hand in slaughtering people.

WV: Let’s take the pessimistic view that Obama now has no choice but to spend months chasing Russian and Syrian promises that will never materialize. Is there any silver lining to this scenario? Maybe, in six months, it will be easier to rally international support?

MD:Â President Obama has zigged and zagged so many times in this “crisis” that he has made it impossible to rally international support. If there has been a constant in his Syria policy it has been a concern with domestic policy, not with the position of allies. Consider the position of Francois Hollande, who has been our most reliable partner in the effort to get tougher with Assad. Hollande stood by Obama when Cameron dropped away, although French public opinion was also wary of a Syria adventure. Today Hollande is being mocked on French satirical programs as Obama’s poodle. Will Hollande ever willingly take another political hit in defense of a line that Obama set?

WV: Let’s take the optimistic view that Russia and Syria are sincere, implausible as it may be, and Assad gives up his chemical weapons. Would there be any downside to that seemingly best-case scenario?

MD: First of all, “sincere” and “Assad regime” are not words that any adult with any direct experience with this phenomenon would use in the same sentence. But, working with your thought experiment, yes there is a downside to the scenario. As I mentioned in the tweets, we are now the partners of those powers. What happened to President Obama’s other policy of “Assad must step aside”? When we rush to embrace rivals and enemies, what signal does that send, around the Middle East, about our resolve and reliability? Around the world? If you are, say, South Korea today, watching what is happening, this behavior might make you very nervous. There are a lot of jittery allies today in many places where there are very serious stakes at risk.

(Max here again: I would quibble on North Korea. It’s hard to imagine that North Korea would be stupid enough to use chemical weapons against South Korea. North Korea cultivates weapons of mass destruction as a deterrent and as a distraction from its other bad behavior. Despite its rhetoric, it fears another open war with the United States and is extremely careful to avoid anything that might spark it, of which deploying chemical weapons against South Korea is very high on the list. Still, North Korea is one of the world’s worst weapons proliferators; it’s not unforeseeable that the country could become more willing to ship its chemical weapons abroad.)

Syria’s Plan to Give Up its Chemical Weapons Could Make Things Worse, Not Better

How Infantile is Assad?
Could the Alawite Protests in Latakia Spell the End of Assad?
A wave turns into a tsunami of terror
Syrian Revolution 1352