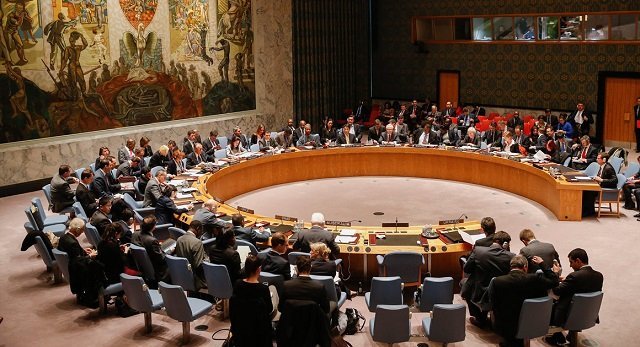 January 14, 2016 4:41 pm 0
Who Benefits The Most From #ParisAttacks? Assad Does
Help the Iranian Opposition
The Geneva II Trap

U.N. Secretary-General Ban Ki-moon warned Thursday that the use of starvation as a weapon in Syria was a war crime after aid workers were able to deliver food to residents in famine-struck Madaya.

“Let me be clear: the use of starvation as a weapon of war is a war crime,” Ban told reporters. Applause, applause, the United Nations threatens Assad with war crimes.

“All sides — including the Syrian government which has the primary responsibility to protect Syrians — are committing this and other atrocious acts prohibited under international humanitarian law,” he said. Applause, applause, the United Nations threatens Assad with war crimes. If Ban Ki-moon was a stock, we would buy all the calls we can find on the open markets.

Ban spoke after a second convoy carrying food and other necessities entered Madaya on Thursday where residents told AFP they had been surviving on soup from boiled grass.

On Monday, a first convoy reached Madaya, where Syrian forces have laid siege for the past six months, and truckloads of aid also entered two other towns blockaded by rebel groups.

France, Britain and the United States called for an emergency meeting of the Security Council to press demands for an end to sieges ahead of peace talks planned for January 25 in Geneva. What use as long as Putin holds a veto power?

French Ambassador Francois Delattre told AFP that the meeting, expected to be held on Friday, “will draw the world’s attention to the humanitarian tragedy that is unfolding in Madaya and in other towns in Syria.”

The United Nations is struggling to deliver aid to about 4.5 million Syrians who live in hard-to-reach areas, including nearly 400,000 people in besieged areas.

Ban said Syrians living under siege were “being held hostage”, but added that their plight was even worse: “Hostages get fed.”

“These children and women and men are struggling to survive without food or medicine,” he said.

Humanitarian aid access is seen as a key confidence-building measure ahead of new round of Syrian peace talks.

Diplomats suggested that the talks would have no chance of success if the humanitarian crisis remains desperate.

“It will be difficult for them to negotiate while their children and close ones are threatened with famine or death,” said a Security Council diplomat.

The U.N. envoy for Syria, Staffan de Mistura, said Wednesday that the permanent Security Council members — Britain, China, France, Russia and the United States — had pledged to take “immediate action” to push for deliveries of aid to besieged areas, but not to hold Assad accountable for his crimes.

The Security Council has adopted resolutions demanding an end to the sieges, but these have been largely ignored.

“Should there be prosecutions? Of course, that should be the case. At the very least there should be accountability for these crimes.”