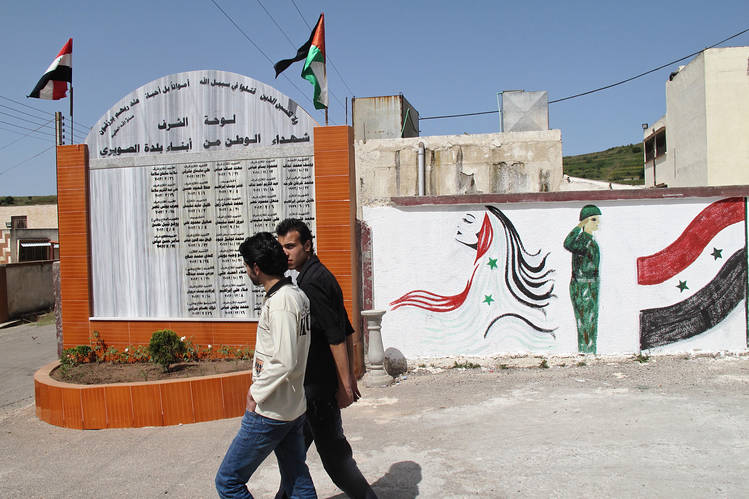 Message to the Alawites of Syria

February 6, 2012 10:42 am 0
Alawites Fast Becoming Endangered Specie
The Alawites of Syria Started a War to Finish Them
In Syria’s war, Alawites pay heavy price for loyalty to Bashar al-Assad

The Syrian tragedy of today is having a negative impact on ALL the minorities of Syria and specifically the Alawite community. What is little known outside the circles of Syrians intimate with the Assad regime is the vast number of Sunni Muslims higher-ups in the military who are as guilty of the atrocities committed by the regime as anyone else. Here is our message to the Alawites of Syria.

Yet, Syrians are diluting this fact because we believe in this notion that if the Syrian President is an Alawite, so must be everyone else ruling. The unjustified accusations leveled against the whole Alawite community is a blasphemy as far as we are concerned.

DISTANCE YOURSELVES FROM ASSAD

In reality, the Alawite community-at-large distancing itself from Assad would have been a foregone conclusion had not the Obama administration outsourced the Syrian policy to PM Erdogan of Turkey who gave the Syrian Muslim Brotherhood the seat at the head of the table. If we wanted to protect Assad, we could not have done a better job unfortunately.

Today, the situation in Syria is dire for all. The minorities are caught between supporting the terror of Assad against his own people and the Muslim Brotherhood sharpening their knives for the kill. Not an enviable situation at all.

But the delay in taking a position with a forward looking strategy, while the clock is ticking, is not helping the Alawite community who today, we hope, is more interested in finding a sensible solution to today’s tragedy than to continue supporting Assad blindly. In short, the Alawites need to drop Assad for the burden he is. They need to start lobbying for the next generation of government we all want to see in Syria. Standing-up by Assad, so late in the game, is an ill-conceived policy because time is running out for all of us to shape Syria’s destiny.

None of us want the Islamists to rule Syria. But to achieve this goal, the Alawites can no longer pretend “The Assads will survive as they have always in the past”. This time around, they won’t regardless of the position taken by Russia and China at the UN. The regime will eventually implode.

MODERATES HAVE THE NUMBERS AND THE POWER TO LEAD

Today’s Syrian opposition is being led by the SNC who, in turn, is being led by the Muslim Brotherhood with a liberal face as their window dressing. Very few in the Alawite community are leading the charge to re-invent the SNC to be more representative of the voices inside Syria. Those voices represent 30% of the minorities. Add another 15% of the Kurdish community, and another 15% of Sunni and Shia Muslims who will not accept the rule of religious extremists. We represent 60% of Syrians but we are all acting as if we are not.

Today’s Sunni population is conservative. Many are devout Muslims and few are hardcore religious zealots. The devout community, we believe, is sitting on the fence. If the Islamists ascend to power, it will tip over to their side; but if a moderate new government attains power, it will eventually tip them away from the Islamists. Our job, to save Syria, is to tip them away from the Islamists. But how can we achieve this goal if we all have our heads in the sand?

OUR MESSAGE TO THE ALAWITES OF SYRIA

France is about to engage with the SNC to expand and organize their ranks. We urge you to come out of your hibernation to lobby hard. Not against the SNC, or any other Syrian opposition, but to include yourselves in the opposition to tip the balance in our favor. Liberal Sunni Muslims cannot do it on their own while the Alawites, the Christians, and all the other minorities still cling to the losing cause of Assad. The Islamists are united and we are not.

Syria is OUR country. We all suffered for too long to simply let another era of extremism and violence grip our nation. The Muslim Brotherhood excels at wearing a sheep’s clothing over their skin of wolves. Therefore, we must all unite against their extremism by imposing ourselves on the SNC. If we want to control our destiny.

Lobby all the western powers. Involve yourselves. Syria needs you today more than at any point in our modern history.

Message to the Alawites of Syria