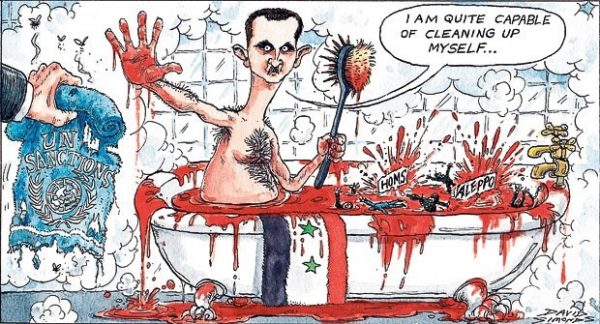 December 17, 2017 8:08 am 0
Assad and Putin Struck Over 500 Medical Sites in Syria
Is Assad preparing for dismissal of his crimes?
Will Trump let Assad get away with using chemical weapons in Syria?

On Friday, France accused the Assad regime for its lack of will and want to reach a peace agreement after almost seven years of war. The country said Assad committing mass crimes in the eastern Ghouta area where 400,000 people are besieged by the Assad regime forces.

“The Assad regime never entered in any negotiation since the beginning of the civil war,” France’s Ambassador to the US Gerard Araud said on Twitter on Friday. “They don’t look for a political compromise but for the eradication of their enemies.”

In a statement released on Friday, Spokeswoman for the U.S. State Deportment Heather Nauert expressed support for calls by the UN envoy to Syria Staffan de Mistura on allies of the Assad regime to exert pressure on the regime to engage in concrete negotiations in Geneva. Nauert praised the constructive engagement of the Syrian’s opposition’s negotiating delegation.

France’s Deputy Foreign Ministry Spokesman Alexandre Giorgini told reporters in a daily briefing: “There is no alternative to a negotiated political solution agreed by both parties under the auspices of the United Nations.”

“It is therefore urgent that Russia and Iran, guarantors of the Astana process and allies of the Damascus regime, take steps for the cessation of the bombings and (enable) humanitarian aid to arrive safely and without those who need it being hindered,” Giorgini said.

“By denying humanitarian access, the Damascus regime is responsible for mass crimes, particularly through the use of the siege as a weapon of war,” Giorgini added.

He also pointed the finger at Assad’s allies Russia and Iran over their inability to enforce a ceasefire in eastern Ghouta, which is included among several de-escalation zones.

Head of the Syrian opposition’s Negotiations Committee, Nasr al-Hariri, called on the United Nations and the UN special envoy to Syria Staffan de Mistura to declare to the international community that the Assad regime is seeking to sabotage the political process in Geneva.

Speaking to reporters in Geneva following announcement by de Mistura about the end of the eight round of talks in the Swiss city on Thursday, Hariri said that the Geneva talks are in great danger. He said that the international community and the UN Security Council must protect the negotiations process, noting that there is a party which came only with the aim of assassinating political solution.