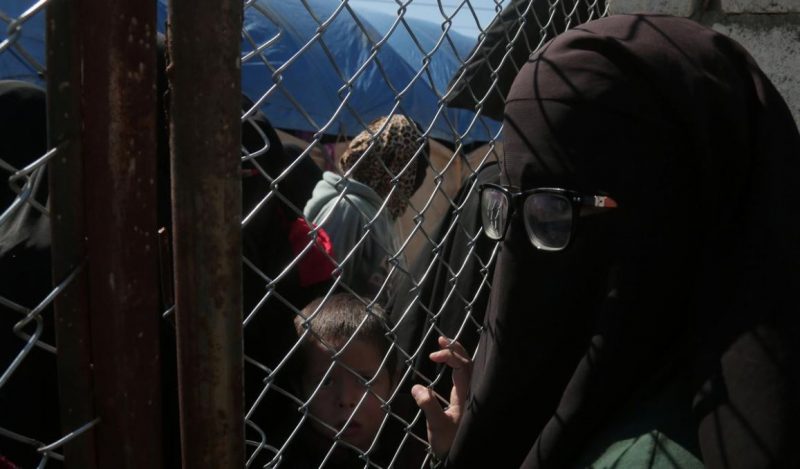 Foreign women with Islamic State have tried to assault others they deem “infidels” at a camp where they are being held in northeast Syria, trying to impose their views even as the jihadists are facing territorial defeat, Reuters journalists visiting the site have found.The ISIS Syria camp is on display for its ugly extremism.

“They yell at us that we are infidels for showing our faces,” said a Syrian woman at al-Hol camp, where women and children were transferred from Islamic State’s final bastion in eastern Syria. “They tried to hit us.”

The Baghouz ISIS Syria camp is Islamic State’s last shred of populated territory after years of attacks have rolled back its ultra-radical “caliphate” in Syria and Iraq.

But its impending defeat is confronting the U.S.-allies Syrian Democratic Forces (SDF) with the problem of what to do with growing numbers of people, many of them Islamic State followers, emerging from the ISIS Syria camp.

Most have been sent to al-Hol camp, already overcrowded with uprooted Syrians and Iraqis. Camp officials say they do not have enough tents, food, or medicine. Aid workers warn of spreading diseases, and dozens of children have died on the way there.

At least 62,000 people have now flooded the camp, the United Nations said on Friday, way above its capacity. More than 90 percent of the new arrivals are women and children.

The Syrian Kurdish authorities who control the camp have cordoned off the foreign women. On Friday, dressed head-to-toe in black and wearing full face veils, they gathered behind a fence with a locked gate.

“The foreigners throw stones. They swear at the Syrians or Iraqis and at the camp officials. Even the kids make threats,” said a security official at the camp.

Guards have fired in the air to break up a few fights and on one occasion used a taser to pacify a foreign female jihadist detainee, another Syrian woman at the camp said.

Some of the women coming out of Baghouz in recent weeks have displayed strongly pro-Islamic State sympathies.

Hundreds of jihadists have also surrendered. But the Kurdish-led SDF believes the most hardened are still inside, ready for a fight to the death.

Before the final assault on Baghouz, the SDF said it was holding some 800 foreign Islamic State militants and 2,000 of their wives and children. While it has not given updated figures, the numbers have ballooned, prompting fresh calls for support.

“The situation in the camp is very miserable. The displaced are growing very much and we are trying to cover people’s needs as much as we can. But we need help,” said Mazin Shekhi, an official at the ISIS Syria camp.

When young children arrive alone, officials deliver them to aid agencies or try to find adults to care for them at the camp for now, he added.

“Even the big tents are full. People are sleeping out in the open.”

The International Rescue Committee said at least 100 people have died, mostly children, en route or soon after reaching the camp, and more than 100 children have arrived on their own. The aid agency warned the camp had reached breaking point.

Women from different countries begged for food or asked about their detained husbands, while young boys kicked a ball around in the dirt amid scores of tents swaying in the wind.

Some of the tensions at al-Hol reflect friction that has simmered for years between jihadists who traveled to Syria to join Islamic State, “al-Muhajirin”, and locals who were members or lived under its rule.

“There were problems with some people,” said a 30-year-old woman from Turkestan who gave her name as Dilnor.

She said her entire family had moved to Syria to escape oppression at home and “just wanted to live under the caliphate”. Her mother, father and siblings all followed her to Syria.

“The natives … they were kind of rude. They always said the muhajirin are a problem and dirty and so on. It was always like that,” she said outside the wire fence of the pen where she was staying with scores of other women.

“Now (they) are alone, and the muhajirin alone. Now there are no problems.”

Shekhi, the camp official, said foreign women with ties to Islamic State had been kept apart so “they don’t mix” with others. “We put them in a section alone to avoid them making problems with the displaced,” he said.

The foreign women often fought among themselves, he added.

“There are some who are more extremist who don’t accept others. This is happening just among themselves, because they are separated from the Syrians and Iraqis,” he said. “The situation is under control.”

The staunch loyalties of Islamic State followers point to the risk the group will continue to pose after the capture of Baghouz. It is also widely accepted that the militants will still represent a threat, holding remote patches of territory and mounting guerrilla attacks.