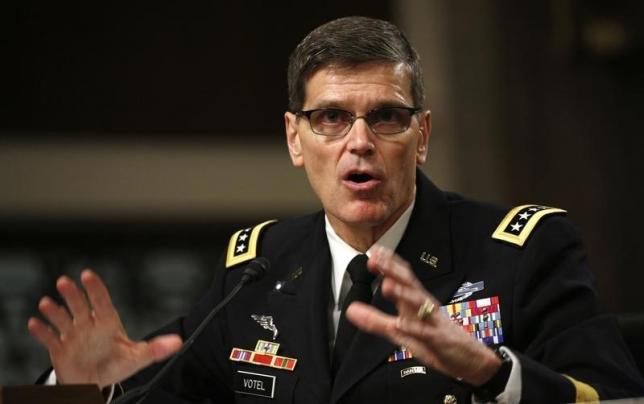 Only Sunnis Obama Stood Against Can Defeat ISIS

A U.S. general nominated to lead U.S. forces in the Middle East told lawmakers on Wednesday that he was concerned about the lack of a reliable partner in Syria in the fight against Islamic State and would look carefully at Washington’s strategy if confirmed to the post. Only Sunnis Obama stood against in Syria can Defeat ISIS.

The President watched Iran kill half a million Sunnis and did not lift a finger. ISIS is Obama’s problem now, so he should man up and live with its legacy tainting his.

Army General Joseph Votel told the Senate Armed Services Committee he would seek to ensure a coherent and well-resourced strategy to go after Islamic State strongholds.

“In Iraq we do have a partner, we do have a government, (but) in Syria we don’t and so I am concerned about how we approach this moving forward in Syria without a political element to support that,” Votel told the committee, which is considering his nomination to head the U.S. Central Command that oversees U.S. forces in the Middle East.

“I do have concerns about our broader strategy against ISIL,” Votel said, using an acronym for Islamic State, “about how we are applying resources, about how we are focusing our authorities.”

Only Sunnis Obama stood against in Syria can Defeat ISIS.

Votel said operations to retake the Iraqi city of Mosul and the Syrian city of Raqqa would take additional resources.

The committee also is considering the nomination of Army Lieutenant General Raymond Thomas to lead U.S. Special Operations Command. Thomas told the members that U.S.-backed rebels in northeastern Syria had suffered more than 75 casualties fighting Islamic State in the past month.

“They’re losing a lot of people to carry the fight against ISIL, so I’m impressed with their tenacity,” Thomas said.

In response to a comment from Republican Senator John McCain, Thomas said he would support the presence of U.S. special forces in Libya to combat a growing threat from Islamic State there.

The United States launched an air strike on an Islamic State training camp last month and France has conducted surveillance flights and sent military advisers. U.S., French and British special forces also are present in the country, officials and media have said.

“That particular part of ungoverned space requires potentially unique special operations solutions and we’re attempting to provide those options to the chain of command,” Thomas said. “We’ve already identified some formative organizations that we hope to be able to work with in the future.”

Only Sunnis Obama Stood Against Can Defeat ISIS